Interview with Dr. Ebony Utley, author of Rap and Religion

What prompted you to write Rap and Religion:Understanding the Gangsta’s God?

I always say that rap and religion called to me; I didn’t go looking for it. I tell a story in the preface about the first time I heard secular rap music in the church parking lot after Sunday service. The unspoken rule was no rap music on Sunday, but when I heard Snoop Dogg that Sunday, it felt rebellious, and it felt right. I realized that rap and religion serve the same purpose—self-expression, inspiration, resistance to oppression. That’s when I started writing the book in my head. Throughout school I was interested in how people acquired power, and rap and religion were two key strategies. When I realized I could combine the two I knew I had a powerful story to tell.

The highlight of my research was surveying undergraduates about their interpretations of rap and religion. Chapter 6 - “The Rap on Rap and Religion” asks 175 students about their personal religious beliefs and their interpretations of rappers’ beliefs about Jesus, the devil, and God. Their responses are refreshing, interesting, entertaining. It’s certainly my favorite part of the book.

How did your research change your outlook on rap and religion?

The research gave me a greater appreciation for rap music. So many critics claim that hip hop is inauthentic, that it isn’t as sophisticated as it used to be, that it’s morphing into pop music. All of that is true. There are elements in hip hop that meet all of those negative criteria, but the research gave me an appreciation for the artistry of simplicity. Yes, hip hop is different today than it was 10, 20, and 30 years ago, but I learned to embrace its diversity. The same goes for religion. I learned to appreciate the diversity of religious manifestations. Ideas about God are fluid and dynamic. Even if you think of God in one way, there is someone else with access to the same information who thinks of God in a different way. 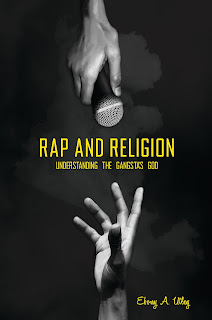 There’s always more work to be done, but I am really, really proud to be one of the first scholars to publish a comprehensive, single-author book about rap and religion. My favorite review described the book as an “often encyclopedic journey.” I read that and thought, if only he had seen the resources that didn’t make it into the book! I hope Rap and Religion will always be a resource because it honestly is a compendium of rap and religion throughout hip hop history. Twenty years from now I expect the categories I’ve outlined to expand, but I don’t anticipate that they’ll be eliminated. If I were in the studio laying down a track, my book is just the bass line. There are so many more layers to add to this signature song.

I’m interested in the pursuit of power. Rap and Religion was about how rappers use God to empower themselves. In my next book I’m interested in sex and how women use sex to empower themselves. I am collecting interviews, so if women out there want to talk to me about sex and power, hit me up on Twitter @u_experience or send a message through theutleyexperience.com.
From ABC-CLIO at 9:00 AM