The Taliban: Afghanistan’s Most Lethal Insurgent


For Westerners, Afghanistan has always been distant, exotic, and periodically threatening. In the Occident, the Afghan warrior tradition enjoys well-earned respect. Many countries have invaded Afghanistan, but few have controlled it for long. In the 19th century, the British conquered, then were defeated, then conquered again, and then left Afghanistan. The Soviets had an equally checkered relationship with Afghanistan and, like the British before them, were defeated.

Afghans, too, suffered the wages of war. In the late 20th century, the Soviets carpet bombed villages and valleys, killing over 1 million Afghans and dispersing many millions more into squalid, disease-ridden refugee shanties. After the Soviet invasion, the always-fragile traditional economy collapsed, plunging Afghans into destitution, fatalism, and despair.

For more than 12 years, the United States has been at war in Afghanistan. Events surrounding that country provoke controversy. An American soldier captured by the Taliban under questionable circumstances was recently traded for elite Afghan insurgents. Will this prolong the insurgency, will it shorten it, or will it have no consequence? This is uncertain. But what is certain is that Afghanistan serves as a grand laboratory of military and economic developmental polices. Lessons drawn from counterinsurgency successes and failures guide American policies in some of the most desperately poor nations of the world. This is a battle of wills.The Taliban’s goal of reestablishing Islamic law, or Sharia, is common to many Islamic organizations, both militant as well as those who proclaim themselves peaceful. The use of insurgency is one tactic to achieve the world domination of Islam. Militant Islam is expressed through different means and media. For this reason, it is a battle of ideas, as well as bullets. It is being waged through the Internet, in mosques, and in religious schools, or madrassas, as well as on the fields of battle in Afghanistan.

The Taliban offer an unrelenting dedication to conquer Afghanistan, an unconstrained use of terror, and solidarity with important fragments of global Islam. The Taliban leverage deeply ingrained Afghan skepticism of Western promises for a better future. Foreign men have come and gone from Afghanistan, and, despite promises, only the poverty remains. Taliban leaders boast that Afghans are armed with the religious fervor, honor, and resolve. “Such weapons are neither available in the arsenal of America nor in the warehouse of her allies.”[1] In January 2013, the Taliban crowed, “No sooner will the foreigners quit than the Afghans will start living under the cover of an Islamic government and in the environment of Islamic brotherhood.”

The American-led Coalition is determined to prevent the Taliban’s triumph. Today’s soldiers on both sides of the struggle have lived only in wartime. The sons of Taliban fighters, who were 10 when the group was scattered into Pakistan, are now in their early 20s. Many are hardened fighters and will, undoubtedly, face the sons of the Northern Alliance. The Taliban are tough, but so are many other Afghans.

As the book The Taliban: Afghanistan’s Most Lethal Insurgents comes to publication, U.S. forces are scheduled to leave, and the Taliban will certainly try to fill the security vacuum. Thirteen years of building a civil service, army, police, and health and educational system will be put to the test. The extent to which Afghanistan’s fortunes are intertwined with or independent of American military will be decided. Will the Taliban’s power-sharing negotiations become a viper’s embrace of the still-struggling Karzai regime? Can the Karzai regime stand on its own to meet the Taliban challenge? The stakes are survival for the new Afghan state. 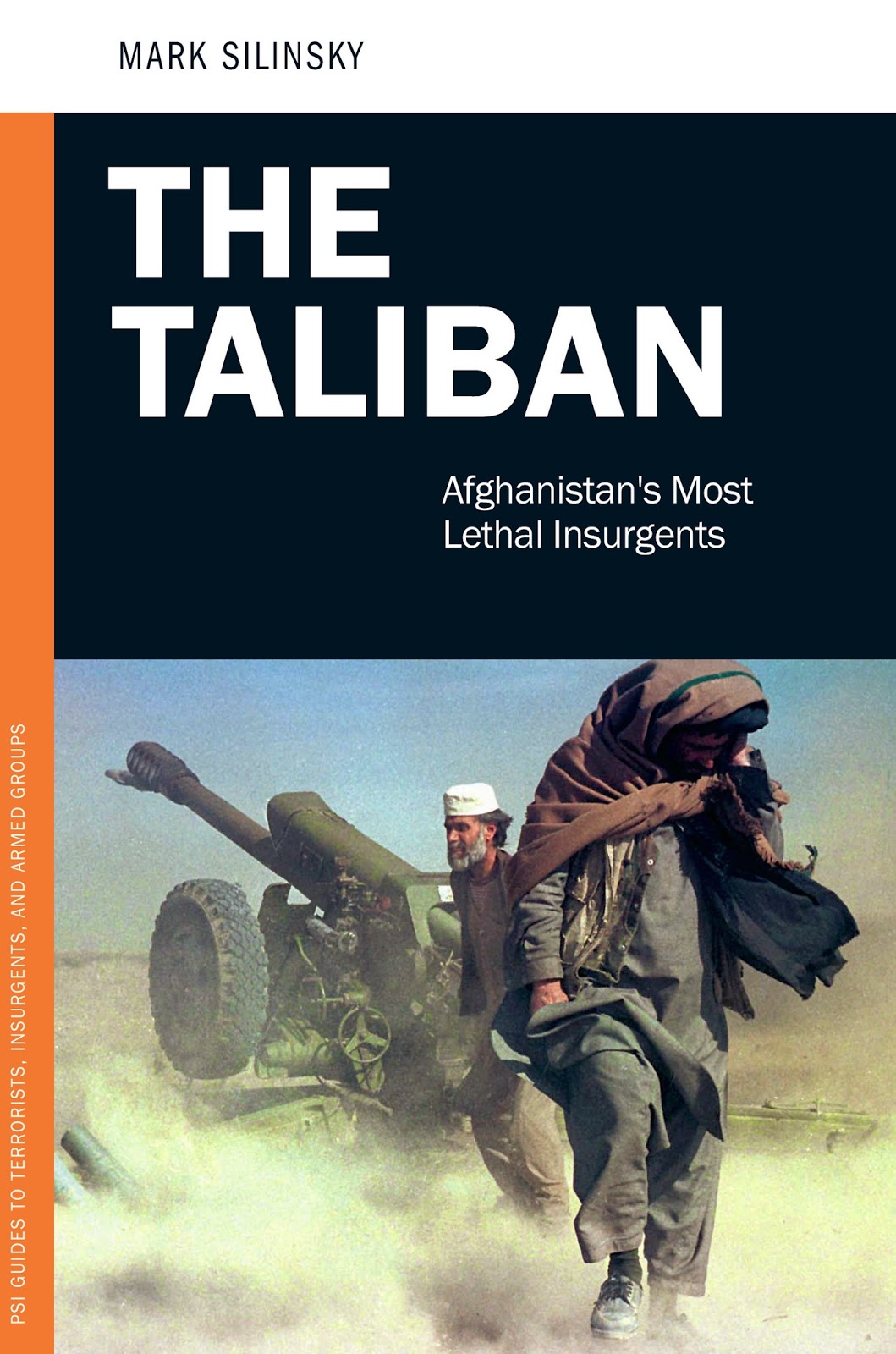 Mark Silinsky is a 30-year veteran of the defense intelligence community. He has served as a senior counterinsurgency advisor and counterintelligence analyst in the United States and in Afghanistan. He graduated Phi Beta Kappa from the University of Southern California; earned a master's degree from Oxford University; and is a graduate of the Naval War College, the National Defense University, and the National Intelligence University.

[1] Statement of the Islamic Emirate on the Tenth Anniversary of 9/11, Afghan Forums, Accessed July 1, 2014, http://www.afghanforums.com/showthread.php?23426-Statement-of-the-Islamic-Emirate-on-the-Tenth-Anniversary-of-9-11-you-must-read-it-)
From ABC-CLIO at 12:14 PM No comments:

The Enduring Relevancy of Nation-States in International Politics: The Case of China

We are well in to the second decade of the 21st century and may observe the contemporary security challenges in global politics. The international environment is fraught with transnational threats, from national disasters to infectious diseases, politically-motivated organized violence to technologically-sophisticated cross border threats. It is difficult to look with optimism at the 21st-century international security situation. It may be even more difficult to prepare for it.


But, there remains a crucial element of international politics and the insecurity therein—whatever the time period—that is known, namely, the preeminent role of nation-states. Understanding the interests and objectives of a nation-state, its intentions and objectives as well as its capabilities, plans, and operations, prepares us for the most daunting challenges of the 21st century.


Indeed, nearly every day in newspapers around the world we read about one nation-state in particular, China. Asia to Africa, the Middle East to the Americas, the activities, products, and services of China and its state-owned enterprises and citizens fill the headlines of business and economic news headlines. Moreover, politically, China is making its presence known throughout the world, well beyond its borders.


Is this all by design? Does China have a strategy in place to effect international politics? Current events give us a glimpse, perhaps, of China’s strategic intentions. For example, from May 20-21, 2014, China hosted the fourth summit of the Conference on Interaction and Confidence-Building Measures in Asia (CICA) in Shanghai, taking over the chairmanship for two years. On the sidelines of CICA, China and Russia signed agreements for Russia to supply China with natural gas for 30 years to help fuel the economic development of both nation-states, but especially China. Worth an estimated $400 billion, China is developing closer strategic ties to Russia; however, for what purpose? How do China and Russia envision international politics in the 21st century?


Within its own borders, meanwhile, China is facing daunting economic as well as social challenges. Recent events reveal problems at home. In the predominantly-Muslim region of Xinjiang, multiple attacks on May 22, 2014 killed dozens and injured nearly 100 Chinese citizens in the city of Urumqi. The central government in Beijing blamed ethnic Muslims, locally known as Uighurs, and labeled them as terrorists. To what extent will security challenges like this affect Chinese policies, domestic and foreign? How will China address its internal challenges in the face of external events, both regionally and beyond?


In fact, this is the traditional strategic tension for China, managing relations within and outside of its own borders. To understand recent events such as the CICA summit, the Sino-Russian gas deal, or the attacks in Urumqi, one needs a foundational understanding of the strategic aspects of China.


In China, as elsewhere in Asia, history plays a vitally important role in political affairs, domestic and international. Edited by Donovan C. Chau and Thomas M. Kane, China and International Security devotes an entire volume comprising 13 chapters to understanding the strategic history and relationships of China. From dynastic to modern times, China’s history has much to inform us about its strategic intentions and plans, including in international politics today.


To capture a sense of the internal debates and challenges of China, the second volume of China and International Security focuses on Chinese national security, also in 13 chapters. We learn that China’s Muslim minority is but one example of the strategic tensions within China. Areas challenging China internally include its demographics and Communist Party as well as its views of human rights and the international security environment.


Taken together, these two volumes, one historical and another inwardly focused, provide the strategic framework for better comprehending China’s contemporary security challenges, which is the focus of volume three, comprising 15 chapters. From regional to international strategies, China is exhibiting purposeful plans and relationships to further Chinese strategic interests. While the character of these interests may be debated, what is clear is that China has national interests, and it is attempting to promote and preserve them. Thus, the role of nation-states in international politics is revealed.


China will have a profound influence on the 21st-century world. What happens in China will have political, economic, and, therefore, strategic effects beyond its borders. What China does, near and far—that is, how China behaves—will also impact politics, regionally and internationally. To prepare strategically for the 21st century, we must look to the past and within China as well as examine its regional and international strategies; this is the purpose and utility of China and International Security. 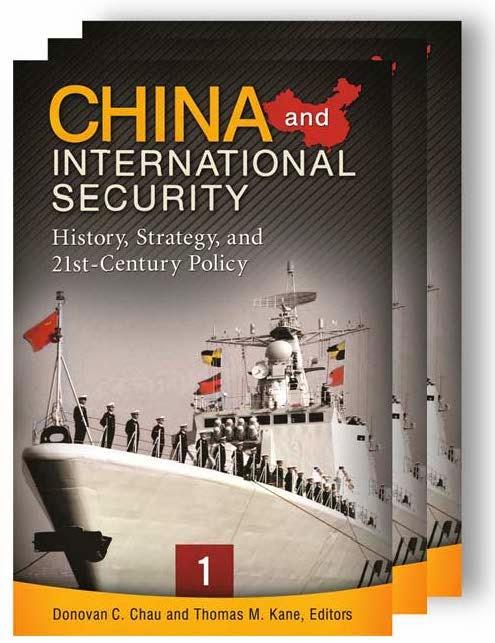 Donovan C. Chau, PhD, is associate professor of political science at California State University, San Bernardino. Educated at Claremont McKenna College, Missouri State University, and the University of Reading, his teaching and research focus on international politics, particularly in Asia and Africa. He has written book chapters, journal articles, monographs, and two books, including Exploiting Africa: The Influence of Maoist China in Algeria, Ghana, and Tanzania.

Thomas M. Kane, PhD, is senior lecturer at the University of Hull, specializing in strategic studies and international relations with a particular interest in East Asia. His published works include Chinese Grand Strategy and Maritime Power and Ancient China on Postmodern War. His book Strategy: Key Thinkers includes substantial material on ancient and 20th-century Chinese military thought.
From ABC-CLIO at 9:30 AM 1 comment: