El Chapo’s Take-Down Will Not Fragment the Sinaloa Cartel

Such Mexican cartels as the Arellano Féliz Organization, the Beltrán Leyva Organization, the Gulf Cartel, and Los Zetas have fragmented when their boss was captured or killed.  Lieutenants vied for power with each other even as rival crime organizations sought to seize the turf of the fallen Mafioso.


In contrast, there is a good chance that Sinaloa Cartel is likely to avoid such fragmentation.  In other words, the bloodless take-down of Joaquín “El Chapo” Guzmán Loera is a thorn in the side of the Sinaloa Cartel, but not a dagger in its heart.


Ismael “El Mayo” Zambada García, who has disguised himself with plastic surgery, should be able to step into El Chapo’s boots without a free-for-all among colleagues.  El Mayo, born January 1, 1948 in El Álamo, Badiraguato, Sinaloa, is a savvy, seasoned narco-trafficker, an inseparable ally of El Chapo, and virtual co-leader of their enterprise that stretches from to Central America to Europe to .


Chicago, Illinois, recently slammed El Chapo as “Public Enemy Number One” because of the Sinaloans dominance of the Windy City’s drug commerce.

During El Chapo’s imprisonment from June 9, 1993 to January 19, 2001, Zambada helped orchestrate his escape from El Grande prison in a laundry cart after his electronically wired cell door inexplicably flew open and video cameras went dark.  The feat became known as the “golden kilogram”—an allusion to the weight of the gold used to bribe those who helped the kingpin gain freedom.

El Mayo is also allied with Juan José "El Azul " Esparragoza Moreno, one of the most astute lords in Mexico’s underworld and, by far, its best negotiator. El Azul, so called because of the blue tint to his skin, combines the bargaining skills of a Talleyrand, the strategic instincts of a Henry Kissinger, and the low-keyed personality of a squint-eyed accountant.  Aligned with the Juárez Cartel until the July 1997 death of Amado Carrillo Fuentes, he cast his lot with the Sinaloa Cartel after El Chapo rolled out of the Puente Grande prison in a laundry cart.  Although a power in the Sinaloa syndicate, Esparragoza has carved out a fiefdom in and .


El Mayo’s financial and political acumen enabled the mustachioed strongmen to knit close relations with Félix Gallardo and Amado Carrillo Fuentes in their heyday. Since the 1990s, El Mayo has had his own pistoleros, which helps him enforce agreements with interlocutors. He has enjoyed a high degree of autonomy in his areas of greatest influence: Sinaloa, Durango, Cancun, Quintana Roo, Sonora, Monterrey and Nuevo Leon.   While his gunman Gustavo Inzunza reportedly killed more than 50 people in Sinaloa, spilling blood is not El Mayo’s forte—except when agreements with him remain unfulfilled. The DEA and PGR have placed a $5 million bounty on his head.
What group could seek to take-over the territory and assets of the Sinaloa Cartel?  Beset by intra-mural brawling, the sadistic Los Zetas have lost their command and control structure manipulated by Miguel Ángel “El 40” Trevino Morales and Heriberto “The Executioner” Lazcano; although Héctor is still in command, his Beltrán Leyvas have suffered disintegration as a half-dozen cartelitos have emerged; the Gulf Cartel is riven between Los Metros and Los Rojos; and the Knights Templars have their hands full battling auto-defense groups, the Navy, the Army, and the Federal Police in the Tierra Caliente.
Only the fast-growing Cartel de Nueva Generación Jalisco (CJNG), which has been an off-and-on ally of El Chapo, could pose a threat to the Sinaloans. However, the CJNG has more enemies than friends.  Its foes include La Resistencia, Los Zetas, and Los Knights Templars—not to mention remaining elements of La Familia Michoacana.


No one is “untouchable," but the El Mayo-El Azul tandem have the resources, know-how, leadership skills, and cohesion to accomplish a transition from El Chapo and enable the Sinaloa Cartel to maintain, if not expand, its territory. 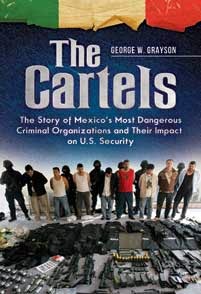 George W. Grayson is professor emeritus at the & Mary.  His latest book, recently published by Praeger, is The Cartels: TheStory of Mexico’s MostDangerous Criminal Organizations and Their Impact on U.S. Security.