An Introduction to Pride Month

Glorious June, the beginning of summer and the month when gay pride parades crisscross the globe commemorating the1969 Stonewall Riots; the month when ordinary looking men and women join their stunningly handsome and beautiful and their exotic and eccentric brothers and sisters on floats, at times showing more skin than anyone across America really needs to see on television. Of course, the heterosexual girls strutting their wares on spring break are doing much the same thing.

June is one of the two times of the year when the GLBTQ community traditionally pauses to celebrate our major and modest successes in securing what ought to be our unchallenged liberties, and to protest those who would impede our march to freedom.

Twenty-five years ago, it was also the month when Americans would get their annual exposure to the term “gay rights” blasted across the airwaves.  Not so anymore, as the battles for and against these rights are mentioned daily in the national and international media.

This year, men and women in the U.S. military will openly march in these parades. We will celebrate a growing support for marriage equality, including that of our President who dragged his feet and used his vice president as a test balloon before coming out in favor – while we try to make sense of this support contrasted against state electorates that are adding constitutional bans against such unions. And for those of us who are research wonks, we will pause to acknowledge Richard Spitzer’s long over due, but nonetheless much welcomed recanting of his terribly flawed study that has been touted for over a decade as proof that reparative therapy and other forms of interventions can cure homosexuality.

As these parades move through the streets of America and well beyond, in Jacksonville Florida our focus will be on an extraordinary coalition of GLBTQ community, titans of local and national businesses, leaders of faith communities and former and current political figures from across the aisles that have come together to nudge our city into the twenty-first century with the passage of amendments to our local human rights ordinances – amendments that would prohibit discrimination against members of the GLBTQ community in the workplace, housing and public accommodations. For many within our community, as is true across the land of the brave, the question of employment rights has already been settled by corporate policies. But now in Jacksonville we seek to codify these rights into law so that all of the citizens of this the largest city by land mass can join the 50% or more of you out there in the blogosphere who take these rights for granted.

As I sit dead center in the middle of this local struggle, I am keenly aware that our conversation is but a reflection of the larger conversations that continue across America.  Reaffirmed by the allies who have jumped on the train with us and completely unsurprised by those who would throw obstructions onto the tracks in an effort to derail us, I am burdened by the question of how many of the GLBTQ community can remain on this train.  We have our Chamber of Commerce and the Catholic Bishop supporting the measure for gays, lesbians and bisexuals, but stopping short of mentioning the Ts and some of the Qs.  And we have women and men who sit on the City Council questioning the inclusion of the words “gender identity” and “gender expression” in our local amendments, pointing to some of the earliest amendments in the state that still don’t carry this nomenclature.

The solid support for sexual orientation contrasted against the silent and open resistance to mention of gender Identity and gender expression is causing me great angst.  I feel torn between playing the roles of U.S. Congresswoman Tammy Baldwin versus Congressman Barney Frank during the 2007 House of Representatives fight over ENDA, the Employee Non-Discrimination Act that would have ended GLB discrimination across the country. In this debate, Ms. Baldwin demanded that transgender people be included in the legislation at any and all costs. Mr. Frank certainly supported this inclusion, but not at the expense of the bill dying in the legislature. 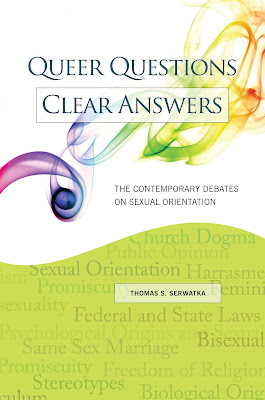 In writing Queer Questions, Clear Answers, I focused on questions about issues surrounding sexual orientation, only occasionally commenting on transgender members of our community.  And when I did speak of these sisters and brothers I was forced to note my lack of knowledge and understanding about the issues that they faced, and to confess my own very early history of discomfort.  A discomfort remedied by personal friendships with transgender and gender-queer individuals – the kinds of friendships that occur when honest intimacy replaces cordial or forced banter.  If it took me time to learn to love and respect these, the “untouchables” of our day, how can I now expect my straight allies to understand why these men and women are in most need of these protections?  How do I make real the message that until we are all free, none of us is truly free?

As gays and lesbians, we self-inflicted at least some of the wounds we have suffered by hiding in our closets, socializing on the margins, and denying our existence even to ourselves.  You just have to compare 13th and 14th century Japan where homosexuality was openly admitted and spoken of to Europe of the same era, where it was most often hidden in the shadows, to understand this. In the early 20th century no one had to know that the person working in the office next to him was gay. This ignorance made it easy for the heterosexual to remain fearful, suspicious and ill informed about who we are.  Then starting slowly in 1969 but later going full steam ahead, we openly declared our presence. And our families and friends began to recognize our humanity and work with us to secure our rights, often urging us not to move too quickly or expect too much.

But how does the transgender person accomplish the same thing – getting the job and then coming out of the closet, without these protections? With low numbers of transgender individuals, most Americans have little to no opportunity to meet them and to learn the incredible stories behind their metamorphoses and the pains they suffer with their new identity contrasted against the pains that ravaged them before their acceptance of self. Nor do we Americans understand that these women and men pose no more and, based on crime data, most likely much less threat to our children than the heterosexual living next door.  Yes, we are uncomfortable with looking at them because of their differences, but differences always make us uncomfortable. We are also troubled looking at the extreme burn patient and we feel awkward talking to the individual with extreme cerebral palsy until we meet them as a friend.  Our discomfort can not be equated with threat or allow for rejection.

So what do I do this June as much of the world celebrates gay pride?  Do I accept a vote that gives gays and lesbians in Jacksonville Florida rights in the workplace, housing and public accommodation that should have been theirs all along and then continue to work for the rights of people equally deserving and in greater need?  Or do I say “no, it’s all or nothing?”  To further complicate this decision is the ironic fact that a little less than a month ago the EEOC passed a ruling that would protect gender identity and gender expression but not sexual orientation in employment.  But even with this, these groups remain unprotected in housing and public accommodation.   And, because they’re based on an EEOC ruling, these protections are open to challenge in the federal court.  One decision makes a great politician; one makes a great humanitarian. What if I want to be both? Stay tuned….
From ABC-CLIO at 9:00 AM

Email ThisBlogThis!Share to TwitterShare to FacebookShare to Pinterest
Labels: LGBT