Cinco de Mayo celebrations occur in over five hundred cities across the United States but mainly in the Southwest and California where Americans of Mexican descent make up an increasingly larger percentage of the population. Such celebrations are much less popular in with the exception of the city of and its environs. In its purest form, the festivities surrounding this important day in Mexican history honor the defeat by the Mexican military of the French troops who had invaded Mexico in the early 1860s to try to carry out Napoleon III’s ambition to establish a strong and permanent presence on the North American mainland—it already had such a presence in the Caribbean. President Benito Juárez had ordered General Ignacio Zaragoza to defend , a city close to , and thereby slow the progress of over 7,000 French soldiers who had set out from on ’s east coast to help bring under French control. Despite having a superior military force, on May 5, 1862, the French were badly outmaneuvered and bloodied by a young Brigadier General, Porfirio Díaz who later ruled as president for over thirty years. Defeated by 4,000 badly equipped Mexican troops, the French troops retreated, and at least for the time being, resisted the French imposition of power. This was a great symbolic victory, although a year later 30,000 French troops routed the Mexican army and occupied ; Napoleon III imposed Emperor Maximilian I as French ruler of , a regime that lasted only three years.

Although some celebration organizers today have succeeded in linking Cinco de Mayo celebrations with its historical roots, it is fair to say that it has largely lost its original symbolic importance in the for several reasons. It is often referred to erroneously as Mexican Independence Day equivalent to the Fourth of July. (Mexico’s true day of independence is the Sixteenth of September that celebrates the defeat of the Spanish by insurgent troops that led eventually to Mexico’s independence from Spain in 1821.) Also, in the past thirty years or so, the celebration in many cities has been taken over by sponsoring alcoholic beverage companies which in extreme cases has led to large scale excessive drinking and pubic rowdiness. Mexican and non-Mexican restaurants alike often take advantage of Cinco de Mayo to increase their profits by pushing cheap beer and Tequila. As a result of this unfortunate and cynical marketing strategy on the part of these companies and businesses, Cinco de Mayo is often referred to derisively as “Drinko de Mayo.” Chicano/a cultural critics have also taken these companies to task for perpetuating stereotypes about Mexicans and Mexican Americans. For example, advertising often features super macho males and seductive women.

by Charles M. Tatum, Author of Lowriders in Chicano Culture: From Low to Slow to Show 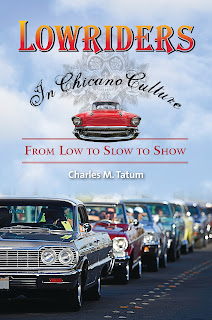 Charles M. Tatum is professor of Spanish in the Department of Spanish and Portuguese at the University of Arizona in Tucson. He is the editor of the upcoming Encyclopedia of Latino Culture: From Calaveras to Quinceaneras that Greenwood Press will pubslish in the fall of 2013.