Transgender In The Workplace: An Idea Whose Time Is Now

It’s a remarkable moment to be openly transgender and working for a living.  Extraordinary progress has occurred in this timely area of business interest over the last dozen years or so.  For example, in the year 2000 there were only three Fortune 500 companies with anti-discrimination protection for transgender employees.  Today, nearly half of the Fortune 500 organizations have adopted policies that protect transgender employees from discrimination.

Despite various political efforts to pass a transgender-inclusive Employment Non-Discrimination Act (ENDA), there is still no federal statute that protects transgender workers.  However, in an amazing turn of events, in April of 2012, the federal government’s Equal Employment Opportunity Commission ruled that Title VII of the Civil Rights Act protects transgender workers from on-the-job discrimination. The ruling formally took effect on May 23, 2012, and the nation's employers have now officially been put on notice that transgender discrimination won't be tolerated in the workplace.

With all this activity swirling around the transgender phenomenon, factual resources are sorely needed to help organizations deal with the many ramifications.  However, until ABC-CLIO chose to publish my book, The Complete Guide to Transgender in the Workplace, there had never been a full-length, hardcover volume on this leading-edge business topic.  I am pleased to report that many people and organizations throughout the country and around the world have found the book to be a useful tool. 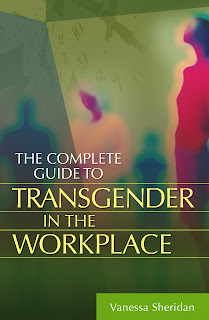 The goal was always to help people.  That’s why I wrote my book.  If the book didn’t make a difference, then the entire exercise was a waste of time and energy.  However, I’m pleased to say that my book is helping organizations to evolve and people to learn and grow.

One of the most gratifying responses I have received was from .  Let me share it with you:

I’m a 47-year-old transsexual woman that recently transitioned successfully at work at Telefónica R&D, in .  Your book, “The Complete Guide to Transgender in the Workplace,” has been vital in the success of my transition at work.  I am eternally grateful to you for having written it.
--Amanda Azañón

It’s a humbling thing to know that someone half a world away found my book useful in her successful transition on the job.  I take no credit for her success, but I’m glad I was able to help in some small way.  I’ll probably never meet Amanda Azañón in person, but I know that her life is now a little better because of something I did.  How can you put a price on something like that?  All I can say it that it feels very, very good.

I’m going to share a secret with you: my book was rejected 116 times by literary agents and other publishing houses before ABC-CLIO agreed to publish it.  I’m not sure what that says about the book, but I think it says something about the lack of insight and/or courage demonstrated by those who turned it down.  ABC-CLIO recognized that transgender in the workplace is a viable, relevant area of business interest, and I’m grateful to the company for making the choice to publish my book.  Organizations have been positively impacted and people’s lives have been changed because of that forward-thinking--and historic--decision by this publishing company.

As we celebrate LGBT pride, let’s remember that progress really is being made, hearts and minds are being touched, and transgender inclusion is more of a reality today than ever before.  I’m honored to be one of many who are working to make a difference in this area.  Thank you, ABC-CLIO, for doing your part.

Vanessa Sheridan’s Twitter page:
@transconsultant
From ABC-CLIO at 7:11 AM