Purpose and Values of Storytelling

Storytelling has been called the oldest and the newest of the arts. Though its purpose and conditions change from century to century, and from culture to culture, storytelling continues to fulfill the same basic social and individual needs. Human beings seem to have an innate impulse to communicate their feelings and experiences through storying. We tell stories in order to make sense of our world. We express our beliefs, desires, and hopes in stories, in an attempt to explain ourselves and to understand others. In The Completed Gesture, a book about the importance of story in our lives, John Rouse writes, “Stories are told as spells for binding the world together.”(2)
According to Ruth Sawyer, “The first primitive efforts at conscious storytelling consisted of a simple chant, set to the rhythm of some tribal occupation such as grinding corn, paddling canoe or kayak, sharpening weapons for hunting or war, or ceremonial dancing. They were in the first person, impromptu, giving expression to pride or exultation over some act of bravery or accomplishment that set the individual for the moment apart from the tribe.”(3)
In this early period everyone was a storyteller just as every young child today is a storyteller. The three-year-old tells a story using gestures, mime, dance, sound, and language, as in an earlier age when the expressive arts were one. As human societies became more complex, art specialties—drama, dance, music—developed. Song separated from narration. Those persons who possessed charisma, a greater command of language, a good memory, and a fine sense of timing became the community’s storytellers.
Stories changed from first-person to third-person narratives. One theory is that deeds were so exaggerated that modesty required the teller to attribute them to a third party, and thus the hero tale was born. Storytellers became the genealogists, historians, and keepers of the culture, as well as its entertainers.
The first written record of an activity that appears to be storytelling is found in an Egyptian papyrus called the Westcar Papyrus (recorded sometime between 2000 and 1300 b.c.e.) in which the three sons of Cheops, the famous builder of pyramids, take turns entertaining their father with strange tales. The earliest known heroic epic, Gilgamesh, was first told by the Sumerians, the inventors of the written word, and was taken over by the Babylonians when the Sumerian civilization collapsed in 2000 b.c.e. There are evidences of Gilgamesh in Homer’s Iliad and Odyssey, in the Greek mythologies, and in Hebrew scriptures. The tellers of the Greek myths created supernatural beings with the power to rule the terrifying forces of nature, and yet these gods had human frailties. Abraham and his descendants, the Israelites, preserved the stories within the Sumerian epic, changing them as storytellers do, and so, out of the story of the great flood came Noah and the ark. Scholars see a relationship between the bull painted by the cave artists, the Bull of Heaven in the Gilgamesh tale, Zeus transforming himself into a white bull to seduce Europa, the Greek myth of Theseus and Minos’s minotaur (who was half man, half bull), and the buffalo dance of Native American tribes.
Storytelling was also looked upon as a way of teaching social and moral values. Both Plato and Aristotle mention storytelling to children in this connection ... Among Native Americans, children were present during storytelling and were expected to listen. Among the Xhosa and Zulu peoples of Africa, storytelling was considered training in listening and telling; children were expected to learn the stories they heard from their elders.
[...]
Storytelling is no longer just for children. Adults have reclaimed it for themselves. Perhaps storytelling fills the need for intimacy not easily found in our mobile society (and not offered by the electronic storyteller that invaded the family living room in the 1950s). Perhaps, as former student Tina-Jill Gordon (now curriculum director, Wall Township Schools, New Jersey) wrote in her doctoral dissertation, “It may be that as our world has metaphorically shrunk, we have had to confront the fact that we are part of a global community. As we seek to understand one another, what binds us together is beginning to seem more significant than what makes us different. Just as we have begun to recognize that the ecosystem of the earth is one interconnected system, perhaps we are beginning to realize that the human experience is similarly connected.”(16)
Web Resources
History of Storytelling
Reading Is Fundamental, Inc.
Origins of Storytelling
Inez Ramsey, Professor Emeritus, James Madison University
Yale-New Haven Teachers Institute: The Oral Tradition:
Professional articles about different oral traditions.
2. John Rouse, The Completed Gesture (Unicorn/Skyline Books, 1978).
3. R uth Sawyer, The Way of the Storyteller (Viking, 1942, 1962), pp. 45–46. (Penguin
edition, 1977)
16. T ina-Jill Gordon, “Teachers Telling Stories: Seven-, Eight- and Nine-Year Old
Children’s Written Responses to Oral Narratives” (Ed. D. diss., Rutgers University,
1991), p. 2. 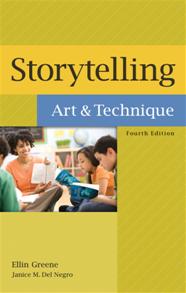 Excerpted from "Purpose and Values of Storytelling" from Storytelling: Art and Technique, Fourth Edition by Ellin Greene and Janice M. Del Negro
Thoroughly revised and updated, the fourth edition of the classic Storytelling: Art and Technique is an essential guide for beginning and experienced storytellers alike.
Ellin Greene, EdD, is an internationally known storyteller, lecturer, workshop leader, and conference director.
Janice M. Del Negro, PhD, is assistant professor at the Graduate School of Library and Information Science at Dominican University, River Forest, IL.
From ABC-CLIO at 8:40 AM