By Elizabeth Faier
The natural pearl, rich in luster, sensuality, and value has long punctuated Bahraini history, culture, economy, and politics. Pearling—diving for and collecting natural pearls from the waters of the Arabian Gulf—occurred throughout the region but was particularly associated with settlements in what is today Bahrain. When the al-Khalifa family, which currently rules Bahrain, arrived in the mid-18th century, they quickly established their presence and control in the area partly through the thriving pearl trade.
During pearl season, which ran during the excruciatingly hot months of late spring until early fall, divers and pullers (men who literally hauled divers to the surface) would leave their homes to embark on the arduous task of collecting pearls. Their work not only kept them away from their homes for long periods of time but also was dangerous, subjecting them to grueling physical conditions and indebting their families to boat owners. As the divers set off from shore, their oars slapped at the sea in rhythmic unison. "The naham, or performance leader, led the men in fidjeri, or sea-faring songs, particular to pearl divers. Punctuating the rhythmic songs were the drum and hand clapping. The songs provided the divers with motivation as they called out together, singing songs of their toil" (Culture and Customs of the Arab Gulf States, 135). Diving was a difficult lifestyle for both the divers and their families; although the divers themselves did not profit much from their toil, it was the significant contributor to the economy at that time.
Around 1930 the pearl trade collapsed when new technology from Japan allowed for the cultivation of relatively inexpensive pearls, or "cultured pearls." Fortunately for the al-Khalifa family, the collapse of the market occurred around the same time oil was discovered in Bahrain, eventually affording the al-Khalifa family resources to modernize the country. By the time the British decided to leave in the 1960s, their influence on both the economic and political development of the region was clearly evident; the tribes with whom the British had partnered on various treaties moved into leadership positions during processes of nation-state building. In the case of Bahrain, the power given to the al-Khalifa family by the British authorities combined with the British import of ethnic Arabs as a way to counter Persian influences in the Gulf, gave way to a split Sunni-Shia demographic that still informs the organization of society today. Thus, in 1971 when the al-Khalifa family declared independence, not only did they establish the nation-state of Bahrain (since 2002, the "Kingdom of Bahrain") but also the dominance of Sunni rulers over a predominantly Shia population.
Today the pearl, or lulu in Gulf Arabic dialect, remains a trope of Bahraini culture. "People … tell stories about the origin of the pearl. In Bahrain, parents tell their children that a mermaid's teardrop fell into an oyster shell and created the pearl" (Culture and Customs of the Arab Gulf States, 135). The meaningfulness of the pearl emerges not only in folk stories but public folk art, as the pearl is a common symbol throughout the Gulf. In downtown Manama, "Pearl Roundabout," an enormous piece of sculpture, testifies to the importance of the pearl and the maritime past. The roundabout, or square, is a major landmark at a busy intersection in central Manama. From a pool of water in the middle of the square rises six enormous dhow (boat) sails atop which rests a pearl; the size of the sculpture dwarfs everything in its presence.
In mid-February 2011, just a few days after the collapse of Mubarak's government in Egypt, world media focused its attention on the Pearl Roundabout and the tiny island-state of Bahrain. Despite warnings and an offer from King Hamad bin Isa al-Khalifa to pay Bahraini families to stay home and forgo participating in any unrest, people gathered at the roundabout to demonstrate against the rule of the al-Khalifa clan. Throughout the Gulf, nationals (citizens who can claim national identity) regularly receive part of state oil revenues, trading political representation for financial subsidy in a complex web of patron relations. Still, outbreaks of violence are not unknown in Bahrain and within the Gulf context, occur rather frequently. Middle East pundits suggest that protests result from religious divisions and sectarianism, as the Sunni elite exercise greater power and receive more opportunities than Bahrain’s Shiite majority population. Still, many demonstrations as well as the current uprising point to deeper societal unrest over jobs, political representation, civil and human rights, and citizenship, moving beyond religious sects and permeating all aspects of society.
Initially, the February 2011 protests called for increased jobs and economic opportunities. However, when the royal family endorsed the use of live ammunition on its population, bringing tanks, mercenaries, and soldiers to the tent encampment that had grown in Pearl Roundabout, a new chapter in Gulf politics opened. Demonstrators were caught off guard in the middle of the night as the military descended upon them, firing indiscriminately on both Sunni and Shia individuals, clearing the square, and preventing emergency care from reaching injured individuals. Since then, both the character of the demonstrations and the royal family response has changed—the royal family has admitted that attacking its population was a mistake, and demonstrators have called for greater reform through complete regime change.
It remains to be seen whether Bahrain will follow in the footsteps of Tunisia, Egypt, and Libya. At the end of February, after a lull following the killings, demonstrators returned to the street, filling Pearl Square with numbers upwards of 100,000, a very sizable amount in any city but especially in a relatively small state such as Bahrain. Today, Pearl Roundabout is both a protest and memorial space, and the pearl remains a part of and symbol for the transition and development of Bahraini society. As the folk legend suggests, the birth of the pearl stems from tears. The question remains, what pearls will today's tears produce for tomorrow?
------------------------------------------------------------------------------------------------------------

Dr. Elizabeth Faier holds a PhD and an M.A. in anthropology from Indiana University and a B.A. in anthropology from Cornell University. She focuses her research and scholarship on issues of gender/feminism, urban space, rights and regulations, power, modernity, globalization, and social theory. Previously she taught at the University of Richmond's Jepson School of Leadership Studies and served as an administrator and faculty member at Zayed University in the United Arab Emirates. Her books include Cultures and Customs of the Arab Gulf States (co-authored), for Greenwood Press.

Greenwood, 2009
Exciting, exhaustive, and essential coverage on the Arab Gulf States, this work is ideal for high school students and general readers.

Saudi Arabia and the Gulf Arab States Today: An Encyclopedia of Life in the Arab States
Sebastian Maisel, John A. Shoup
Greenwood, 2009
This invaluable set provides broad coverage of countries that are little known in the United States and even less written about in English. 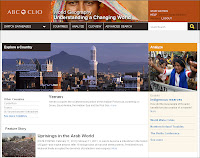 World Geography
World Geography: Understanding a Changing World provides online tools that develop students' global literacy, focusing on the geographical, political, social, economic, and cultural forces that are increasingly important in our globalized world.
From ABC-CLIO at 7:00 AM