Alarm Bells from Fukushima: The Risks of U.S. Nuclear Energy

In the year marking the 25th anniversary of the nuclear disaster in Chernobyl, another nuclear crisis has been unfolding in Japan—and escalating in severity. A record-breaking earthquake and powerful tsunami not only wrecked the northeastern coast of Japan and claimed thousands of human lives but also compromised the cooling systems at the Fukushima Daiichi nuclear power plant, instigating partial meltdown in some of the reactors and consequently causing the venting of radioactive materials. As Japanese engineers, military members, and emergency crew scramble to keep the high temperature fuel rods of the reactors submerged in water through the use of firehoses and helicopter waterdumping, they face fluctuating radioactive leakages that endanger workers' health and threaten a full meltdown should the radioactivity escalate to such portentous levels to call for evacuation and abandonment of these last-ditch efforts.
As the world keeps its eyes glued to media updates on the scenario, industrialized countries around the world are reassessing the safety of their current and proposed nuclear energy operations. The United States, in particular, is showing concern, as several of its nuclear facilities mirror the model of the Fukushima plant. On March 16, two congressional hearings were held to discuss what lessons can be applied from the catastrophe in Japan to improve the safety of the 104 U.S. nuclear facilities, especially in the event of natural disasters. Although Nuclear Regulatory Commission chairman Gregory Jaczko assured that "U.S. nuclear facilities remain safe" in testimony before Congress, many retain concern. Recently, U.S. energy policy has trended toward promoting nuclear energy because it does not emit any greenhouse gases, unlike fossil fuel-based power plants. But events at Fukushima are revealing that even in a country considered to be the technological equal of the United States, the potential hazards of nuclear energy still present an indubitable risk.
---Ashley Hyder, ABC-CLIO Writer/Editor, American Government and Issues
-------------------------------------------------------------------------------------------------------------
Additional Resources
To read more about the assets and risks of nuclear energy in the United States and across the world, check out these recent ABC-CLIO titles and resources: 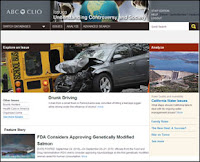 The Technology Trap: Where Human Error and Malevolence Meet Powerful Technologies, by Lloyd J. Dumas (Praeger 2010)
In this eye-opening book, author Lloyd J. Dumas argues that our capacity for developing ever more powerful technologies and the unavoidable fallibility of both machine and man will lead us towards a disaster of an unprecedented scale.

Encyclopedia of the U.S. Government and Environment: History, Policy, and Politics, edited by Matthew J. Lindstrom (ABC-CLIO 2010)
A timely new comprehensive resource on the history of the U.S. government's approach to environmental policy.

Beyond the Age of Oil: The Myths, Realities, and Future of Fossil Fuels and Their Alternatives, written by Leonardo Maugeri and translated from the Italian by Jonathan T. Hine Jr. (Praeger 2010)
This book offers a revealing picture of the myths and realities of the energy world by one of our most renowned energy experts and managers.
From ABC-CLIO at 4:36 PM