Many people mistakenly believe that the Battle of Iwo Jima ended on February 23, 1945, when U.S. troops raised the American flag at the top of Mount Suribachi. That iconic moment, captured in a famous photograph by Associated Press reporter Joe Rosenthal, symbolizes victory to most Americans, but in reality the fierce fighting for control of Iwo Jima lasted several more weeks. No one knows that better than the U.S. Marines, who played a key role in that bloody battle. This excerpt from John T. Kuehn appears in ABC-CLIO's America's Heroes: Medal of Honor Recipients from the Civil War to Afghanistan (March, 2011) and discusses some of the heroic actions on Iwo Jima that led to 22 marines receiving the Medal of Honor.

In the annals of Marine Corps history, Iwo Jima holds a place of almost mythical honor due to the fact that more Medals of Honor (MOH) were awarded there than for any other comparable campaign that the Marines fought during the War. A total of 27 Medals of Honor were awarded, half of them posthumous. Twenty-two were awarded to Marines.
The first of the medals awarded for Iwo Jima was presented for action that occurred two days prior to D-Day, February 17, 1945, to a landing craft commander, Lt. Rufus G. Herring. Herring’s LCI, supporting an underwater demolition team, got into a hot engagement with the coastal guns on Mount Suribachi. Lt. Herring was wounded after a direct hit to the ship, but was able to con the ship and crew to safety. For this action, he was later awarded the Medal of Honor. Once the landings began in earnest on February 19, the intensity of the action can be traced by the numbers of awards. Including Lt. Herrings’ medal, one third of the MOHs awarded for Iwo Jima were earned in the first five days of fighting.
Representative of the heavy fighting was the action that earned Private First Class Jack Lucas his award on February 20. Lucas, of the 26th Marines, found himself and his buddies in support of a tank crew assaulting a pill box. As Lucas’ squad advanced, 11 enemy soldiers came up behind them from a tunnel. Lucas killed two before shielding his buddies from two grenades that had been thrown by the attackers. Miraculously he survived due to the heroic efforts of on scene Navy hospital corpsmen.
The remaining two thirds of the medals were awarded for the vicious fighting against the teeth of the Japanese defenses in the plateau north of the airfield. By March 14, the battle had been officially declared over, but the bitter fighting continued and two Medals of Honor were awarded that day to two more marines. The fighting continued even after the Army’s 147th Regiment had arrived to take over from the marines; however, all formal resistance was assumed at an end on March 25 when the last Japanese stronghold in “Death Valley” was taken. Nevertheless, the next day a group of 300 Japanese survivors launched an early morning Banzai attack on the airfield. Marine First Lieutenant Harry L. Martin organized a hasty defense and then led a key counterattack until he was felled and mortally wounded by an enemy grenade. Martin’s posthumous award would be the last Medal of Honor given for the battle on Iwo Jima.
------------------------------------------------------------------------------------------------------------- 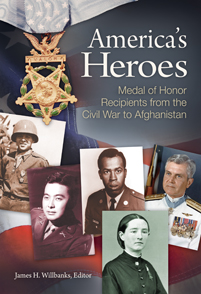 Excerpted from America's Heroes: Medal of Honor Recipients from the Civil War to Afghanistan
Edited by James H. Willbanks
(ABC-CLIO, 2011)
This book features the stories of 200 heroic individuals awarded the Medal of Honor for their distinguished military service while fighting for their country, from the Civil War to the conflicts in Iraq and Afghanistan.
From ABC-CLIO at 1:57 PM

Email ThisBlogThis!Share to TwitterShare to FacebookShare to Pinterest
Labels: History