Interview with Douglas R. Page, Co-author of Plural Marriage for Our Times

What prompted you to write Plural Marriage for Our Times: A Reinvented Option? 2nd Edition? What "message" do you want to communicate?

My involvement co-authoring this book came about because I wrote an article about changing family structures for a local parenting magazine in Massachusetts, called baystateparent.

As I was researching the article, I realized, given the popularity of the show “Sister Wives,” that we needed something about plural marriage, often referred to as polygamy.  I conducted a “Google” search for polygamy experts and came across Phil Kilbride’s CV.

I called Phil’s office and left a message. A day or two later, I called him back and we talked at length about his research into plural marriage, the first edition of his book, and where marriage and divorce stand today.

I was very impressed with Phil. He had great energy and loved the topic. I also came away with the impression that this was a man who loved to teach.

The article appeared in the February 2011 edition of the magazine and I sent Phil a link to the article so he could read it.

And read it, he did!

He also printed it out and used it in some of his classes, he told me. At about the same time, he contacted me and inquired if I’d be interested in joining him as the co-author on his book.

Part of my interest in this topic stands from the fact that I witnessed my parents’ divorce when I was 21. Theirs was a marriage that, on the surface, seemed perfect. There was never an argument, and they appeared to love one another dearly. Little did I know that there were some long-simmering problems between them.

Their divorce left an indelible mark on me. I’ve been married now for more than 20 years, but I continue to think about my parents’ divorce. Divorce is one the most detrimental events any child can experience, especially when they’re young but even when they’re into their adult years.  For any child, I believe, divorce is as traumatic an event as the death of a parent.

And so when Phil mentioned his thesis—allow adults a plural marriage option instead of forcing them to divorce when things aren’t going well in the marriage—I thought he was onto something.

Our opinions and thoughts on marriage and divorce often come from wives, husbands, marriage counselors and the clergy.  But the voices of the people most impacted by divorce – children – are rarely heard from if ever at all. In fact, if you think about it, they’re pretty silent.

Phil had also experienced divorce. I’m not sure how long he and Janet were married but their union produced a daughter. And while I never met Phil face to face, based on our many telephone calls, I came away with the impression he was upset about the breakup. I think what bothered him the most was that he felt he’d let down his daughter. I’m also under the impression that, in spite of their differences, Phil and Janet made their daughter their priority and made it known that she was very much loved and accepted by both of them.

We live in a society that’s very different from the one I knew as a kid back in the 1960s and 1970s. It’s easy to look around a high-income suburb in the United States and see society as it’s always been—filled with stay-at-home moms, dads at the office and rarely a fractured family.

But if you travel not far from where I live in Massachusetts, to, say, Framingham, or parts of South Boston, you see a very different society, one that’s often filled with young, single mothers and, sometimes, a father no where to be seen.

Or, sometimes, we read about, as we did earlier this year in The New York Times, women in their 20s giving birth even though they have no intention of marrying their child’s father.

If the children of these unions never see their mothers marry, will they marry themselves? What impression will they have of love and commitment if their mothers and fathers remain single?

This is what we need to consider. How will today’s babies born to mothers and fathers who remain single view childhood, marriage, love and commitment?

These situations—and the many more we wrote about in the book—made Phil and I ask if the current laws prohibiting plural marriage in the United States serve the nation’s children well. As we see it, they don’t.

Marriage is about more than just love. It’s also about money, jobs, healthcare, property rights, inheritance, living conditions, children, extended family members, religion, schools and likely much more. It’s also about the kind of society we want, not only today but, with our children, well into the future.

So if this book has a message it’s this:  Plural marriage is a way to augment family life in America, care for our kids so they can come to know and understand marriage, help women, especially mothers, and, hopefully, put a dent on the number of fractured families. This is not—let me repeat —not a sexual system.

There were four things:  First, reading the many legal arguments that will likely be made on behalf of plural marriage, especially when “Sister Wives” reality television star Kody Brown and his wives challenge the constitutionality of Utah’s laws prohibiting polygamy in Salt Lake City’s U.S. District Court in January 2013; second, the material I read and interviews I conducted about African American family life. Many of the problems associated with African American family life can be attributed to slavery and racism; third, the data on marriage and family life from the U.S. Census Bureau, which shows traditional families on the decline; fourth, the fact that many Native American tribes, well before they saw their first European settlers, engaged in a variety of family structures, including plural marriage.

These issues seem to surprise some of the people I’ve spoken to who have read the book.

How did your research change your outlook on the subject?

Phil’s research gave me a better appreciation and understanding of the “wife-in-law” or “husband-in-law” trap that sometimes second wives and husbands experience. I’ve seen some of this with my dad who has remarried twice since divorcing my mother. I’ve also had friends and colleagues share their experiences of being the “wife-in-law” and also have to weigh in on how children are brought up. My father, for that matter, has experience in bringing up the children of his two other wives.

So far the reaction has been positive, but I’m sure someone will take us to task over what we wrote. After all, we’ve taken a very provocative yet nuanced stand toward plural marriage.

Let me also make something clear:  It would have been much easier to write a book that dismisses the arguments for plural marriage.  In other words, intellectually speaking, it would have been, I believe, very easy to say plural marriage doesn’t work in the United States for a variety of reasons and here they are. I believe, and Phil did too, that it was much harder for us to prove our point, which is that plural marriage can be an option. If the U.S. Supreme Court is ever given the opportunity to rule on plural marriage – and let’s say they rule it’s a constitutional right—then it wouldn’t be the first time the United States has changed its marriage laws.

I’m writing a novel. It has nothing to do with plural marriage. I also continue to write and report for baystateparent magazine and, on occasion, News & Tech, a trade magazine for the global newspaper industry. 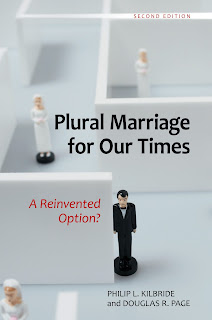 Douglas R. Page, MBA, is a freelance writer and reporter. His work has appeared in the San Francisco Chronicle, The Journal-Gazette, News & Tech, and Bay State Parent.

Tragically, co-author Philip L. Kilbride died about two weeks after the book was released. He came down with cancer back in August and died four weeks later in mid-September.He was 70 years old and left behind a wife, and three children.

Phil’s passing is a profound loss not only for Bryn Mawr College, where he taught for more than 40 years, but also for the worldwide anthropology community. He was a terrific man, great teacher, great dad and, as one of his colleagues said, “intellectually fearless.”
From ABC-CLIO at 11:27 AM