Interview with Dave Pruett, Author of Reason and Wonder: A Copernican Revolution in Science and Spirit

What prompted you to write Reason and Wonder: A Copernican Revolution in Science and Spirit? What “message” do you want to communicate?

Humans have two very different ways of making sense of the world. Let’s call them head knowledge and heart knowledge. Many, particularly in the West, struggle to effectively integrate these seemingly disparate modes of knowing. Because of the dynamics of my upbringing as the son of a very rational father—a physician—and a very intuitive and religious mother, that struggle was acute. On the one hand, I majored in engineering, loved mathematics and science, was a child of the space race, and eventually worked for NASA for a decade. On the other hand, I have a “poet nature” and over the years had learned to listen carefully to the still small voice of intuition. Well into my thirties, these two aspects often seemed in conflict. The journey that culminated in Reason and Wonder was initially a journey for personal integrity.  But along the way, I came to suspect that the roots of the conflict were societal and universal. At the societal level, the tension between the rational and the intuitive plays out as the conflict between science and religion that has dogged humankind since Descartes and Copernicus.

Reason and Wonder has many subtexts.  But the primary one is that science and faith don’t have to be adversarial.  They can be complementary.  The individual who embraces both is more whole, and the society built upon the wisdom of both is saner.

Reason and Wonder represents a radical departure from my conventional academic research in applied mathematics. History was never my strong suit, yet I had to awaken an inner historian to complete Reason and Wonder. What surprised me most was that, with enough digging, Copernicus, Galileo, Kepler, Newton, Darwin, Einstein, and other iconic scientists—the patriarchs of our scientific legacy—came alive. They’ve become my friends and mentors. I have the utmost respect for what these men (and women, e.g., Rosalind Franklin) accomplished for science and humanity, often under the most taxing or even crippling personal circumstances.

Reason and Wonder is a patchwork quilt of individual stories stitched together to tell the big story of the cosmos and of our place as humans in it. What readers seem to appreciate most is the richness and wonder of that story.

How did your research change your outlook on the subject?

It is too often assumed in our polarized society that one must choose between science and faith, a choice that Nobel laureate in chemistry Ilya Prigogine calls “tragic.” Therefore, it surprised me, and it may surprise the reader, how key to their discoveries were the religious impulses of the greatest scientists our species has produced. Einstein may have put it best: “The most beautiful emotion we can experience is the mystical,” he said. “It is the source of all true art and science.”

This is my first book for the general public. It took twelve years, six full revisions, and two good editors before it was deemed ready for public consumption. And even then, I had to read the final print edition from cover to cover before I felt confident that I’d succeeded in telling a coherent story. Public reaction thus far has confirmed my highest hopes.  People from many walks of life have found the story compelling, the prose “elegant,” and the science accessible. I’m beginning to think Reason and Wonder has very broad appeal, broader than anticipated. There seems to be something for every inquisitive reader, anyone who wants to better understand her or his genealogy in a cosmic sense.

What’s next for you?

Giving birth to Reason and Wonder was a long, slow process.  It began with a vague sense of direction, gradually took shape, and then attained clarity.  For me, writing is perhaps what sculpting is for an artist: the belief that somewhere inside that block of marble rests an object of beauty.  On many occasions I nearly gave up.  The encouragement and contributions of numerous friends, students, and acquaintances ultimately brought the book to fruition. The process doesn’t end with publication. The story has been written, but its healing message still needs to be heard. That’s my job for the present.  Perhaps I have another book in me.  Perhaps not. 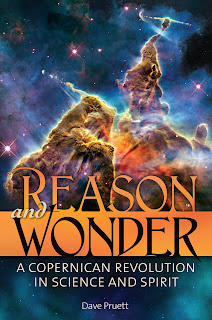 Dave Pruett, a former NASA researcher, is an award-winning computational scientist and professor of mathematics at James Madison University, Harrisonburg, VA.
From ABC-CLIO at 7:30 AM