What prompted you to write your book Banned in the U.S.A.: A Reference Guide to Book Censorship in Schools?

As a professional librarian, I have always believed in the Right to Read.  Some years ago, while serving on the Maryland Library Association's Intellectual Freedom Committee I interviewed a number of proud censors, individuals motivated by a religious conviction that America's children were being perverted by public library books that mention Halloween, witches, homosexuality, evolution, and a world of other topics.  I was driven to discover the origin of the major bookbanning controversies around the country and the responses of banned authors.

Many readers are familiar with books that were famously banned in decades past. But is book banning really still a major problem in the United States?

In some ways, "book banning" is a misnomer.  Today, books are "challenged" by religious groups, after which school or library boards sometimes remove the books or restrict access to them.

In your forthcoming book with Praeger Studied Ignorance (Apr. 2013), you've shifted the focus of your research away from book banning toward what are perhaps less conspicuous tools of censorship—curriculum design and the textbook adoption process. What drove you toward these new paths of research?

I have discovered that the silent self-censorship by textbook publishers is more insidious than direct bookbanning.  Even when pressure groups fail to force direct censorship of textbook content, timid publishers excise the challenged content in subsequent editions of their texts.

What has surprised you about your new research?

Curricular censorship is a growing problem in American schools, often resulting from the same religiously motivated censors who challenge library books.  The removal of courses on evolution is the best example of this.  But a relatively new form of curricular censorship has emerged from the "teaching-to-the-test" requirements of No Child Left Behind.  Today, schools across the country are removing courses on social studies, music, art, physical education, and a variety of other subjects in order to concentrate on the only subjects covered in mandatory standardized tests: reading, science, and math.  The result is a restricted national curriculum that leaves students under-educated, teachers threatened with dismissal, and schools closed if test scores are inadequate.

What banned book would you like to recommend to your readers this year in celebration of Banned Books Week?

A look at the appendices in Banned in the USA reveals that most banned books are those written for children, but several standard literary works appear on banned book lists every year.  They include titles like Of Mice and Men, Slaughterhouse-Five, Native Son, and To Kill a Mockingbird.  I would recommend them all.


Herbert N. Foerstel is the retired Head of Branch Libraries at the University of Maryland, College Park, MD. He has Masters degrees in mathematics and library and information science. He currently serves on the board of the National Security Archive, located at George Washington University in Washington, D.C. He is the author of numerous books, including, Banned in the USA: A Reference Guide to Book Censorship in Schools; Refuge of a Scoundrel: The Patriot Act in Libraries, and the forthcoming Studied Ignorance: How Curricular Censorship and Textbook Selection Are Dumbing Down American Education.

Banned in the USA: A Reference Guide to Book Censorship in Schools

"Simply put, Banned in The U.S.A is a straightforward and fact-filled resource which should be found on the shelf of every academic and public library in the country."

"A valuable reference tool for librarians who are dealing with censorship. ... Librarians and teachers need this book, but patrons who want to better understand the threats to their First Amendment rights should be led to it as well." 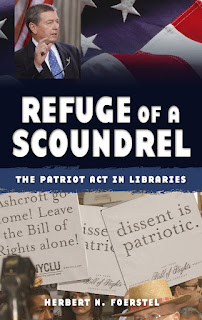 Refuge of a Scoundrel: The Patriot Act in Libraries

"This is the most important book this reviewer has read this year—and the most frightening. It succinctly details the latest effort by the U.S. government to undermine the rights of Americans to free expression and privacy, with a particular focus on libraries and librarians. ... Foerstel's impressive documentation proves that despite the book's brevity, it covers the subject fully and deeply. Highly recommended."