The year 2012 marks the 70th anniversary of the start of the Bracero Program, a guest worker program coordinated between the and Mexican governments. From 1942 to 1964, the Bracero Program offered an estimated 4.5 million work contracts to almost 2 million Mexican men to offset labor shortages in the .

labor shortages as a result of World War II led the government to seek out an alternative source of inexpensive labor. In 1942, the negotiated a treaty with providing for a guest worker program, mainly in the area of agriculture, where Mexican workers were allowed to enter the on a temporary basis under contract to farmers. This source of labor provided economic relief to Mexican families, but it was not without incident. Many participants in the program faced abuses and contract violations by their employers, including instances of discrimination as well as substandard wages and living conditions. Hardships were also endured by the families of braceros, who went months and even years without contact from family members. Nevertheless, the program made an enduring impact not only on the economy but also on Latino history by rooting Mexican communities in the .

These many facets of the bracero experience have been documented though various efforts. The Smithsonian Institution, in conjunction with , , and the of at the of at , launched the Bracero History Archive. This collection preserves the testimonies of individuals who participated in the program and of those affected by the absence of family members working in the . 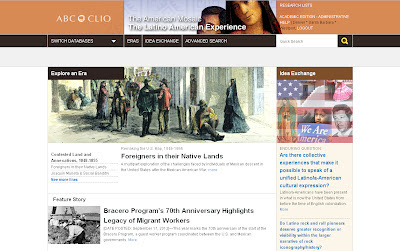 Find out more about the Bracero Program by reading the complete Feature Story on the Latino American Experience, which includes a collection of oral histories selected from the Bracero History Archive that offer a close look into the lives of former braceros and their families. Each oral history, which is presented in the original Spanish text with added English translations, is enriched by a corresponding audio interview and supplementary reference materials. If you are not already a subscriber, click here for a free trial.
From ABC-CLIO at 8:00 AM