At 1:32 a.m. EDT on Monday, August 6, 2012, NASA's Mars rover Curiosity sent a message to Earth confirming that it had arrived on the surface of Mars. Curiosity had successfully executed an intricate landing procedure that NASA had named "Seven Minutes of Terror," involving the help of a supersonic parachute and a rocket-powered "sky crane." The unusual and complicated process for the landing of Curiosity captured widespread attention in recent weeks as anticipation grew for the touchdown of NASA's newest and most sophisticated robotic Martian rover.

In the aftermath of the arrival of Curiosity on the red planet, we asked two of our ABC-CLIO and authors on the topic of space exploration for their thoughts on the day after this extraordinary achievement.

The successful landing of Curiosity on Mars last night continued NASA's enviable record of Mars missions since the 1960s. No other nation has launched as many missions to the Red Planet, and none so successfully. As highlighted by the worldwide media coverage, Mars missions have captured the imagination of people all around the world, particularly because of Mars' potential for extra-terrestrial life and future human habitation. Curiosity's landing and its global coverage demonstrate the persistence of historical trends: the expertise of American space engineering (particularly at the Jet Propulsion Laboratory and by U.S. contractors), the scientific importance of Mars, and the public fascination with Mars missions.


Dr. Stephen B. Johnson, general editor of ABC-CLIO's Space Exploration and Humanity: A Historical Encyclopedia, is an associate research professor with the Center for Space Studies, within the National Institute for Science, Space, and Security Centers at the University of Colorado at Colorado Springs. He is currently assigned under Interagency Personnel Agreement as a System Health Management Engineer for the Advanced Sensors and System Health Management Branch, NASA Marshall Space Flight Center.

Drive on, Curiosity, Drive On!

“You put an X anyplace in the solar system, and the engineers at NASA can land a spacecraft on it." So said actor Robert Guillaume in an episode of “Sports Night,” a situation comedy about a team that produced a nightly cable sports broadcast in 2001. Amen, brother, the team that landed Curiosity proved the truth of that statement one more time with the successful landing of a big rover on Mars in the wee morning hours of August 6, 2012! It was a stunning success.

There was nothing magic about it, but the event itself transcended the hard-edged scientific and technological knowledge that made the latest Mars landing successful. After years of hard work and dedication, the team working on Curiosity had their moment of truth about 1:30 a.m. EDT this morning. The first data back demonstrated that the rover has reached the surface of the red planet safely, and the first images to reach Earth showed where Curiosity was sitting on the Gale Crater floor. It was euphoric at mission control, around NASA, in numerous science centers, and in Times Square where thousands gathered to watch the proceedings. It was a geek’s dream come true as the folks in Times Square watching on the big screen began chanting “sci-ence, sci-ence, sci-ence.”

Of course there is more to do—a lot more—as Curiosity begins its multi-year mission to explore the Gale Crater and to climb Mt. Sharp in its center. Curiosity brings to the red planet’s surface a formidable life sciences laboratory that may well help us resolve beyond serious question whether or not life ever existed on Mars. This rover is the first full-scale astrobiology mission to Mars since the Viking landers of 1976. Having followed the water, and found evidence of it, it is now time for NASA to answer this massively large question: Are there locations on or under the surface that could have supported—or might still support—life on Mars? This is a bold question requiring the boldest type of mission to answer it. Curiosity has 10 different instruments designed to help find the answer to this question. It will look for processes that might have preserved clues about life, either now or in the past, on the red planet.

So here’s to the team that landed Curiosity on the surface of Mars in a very small target inside Gale Crater! All I can say at present after the superb Martian landing is drive on, Curiosity, drive on!

Learn more about the fascinating world of space exploration with these resources from ABC-CLIO, available in print and eBook: 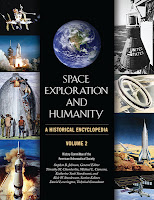 A complete history of human endeavors in space, this book also moves beyond the traditional topics of human spaceflight, space technology, and space science to include political, social, cultural, and economic issues, and also commercial, civilian, and military applications.

In two expertly written volumes, Space Exploration and Humanity: A Historical Encyclopedia covers all aspects of space flight in all participating nations, ranging from the Cold War–era beginnings of the space race to the lunar landings and the Apollo-Soyuz mission; from the Shuttle disasters and the Hubble telescope to Galileo, the Mars Rover, and the International Space Station. The book moves beyond the traditional topics of human spaceflight, space technology, and space science to include political, social, cultural, and economic issues, and also commercial, civilian, and military applications. 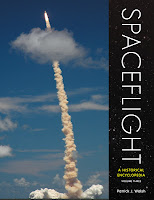 This book is a comprehensive history of the first six decades of space exploration, from the end of World War II to the modern era of routine international cooperation in space.

The recent 40th anniversary of the Apollo 11 mission to the moon was a vivid reminder of the powerful grip space travel has on our imagination. It also was a reminder of the pivotal role the space race played as a national challenge and a source of competition and cooperation in the Cold War, and how its triumphs and devastating tragedies affected us all.

From Sputnik to Soyuz, Mercury 7 to the International Space Station, Spaceflight: A Historical Encyclopedia spans the entire half-century of space travel like no other reference ever published.

This one-stop guide to space exploration provides a wealth of information for student researchers.

Since the first rocket-technology experiments of the early 20th century, space exploration has captivated the world. Recent advances and setbacks have included the new discoveries from the Galileo mission, the Mars Global Surveyor's revelation that water once existed on the Red Planet, the International Space Station, the advent of space tourism, and the devastating Space Shuttle disasters. This one-stop guide to space exploration provides a wealth of information for student researchers.