More than 15,000 librarians and other conference attendees made their way to the week of June 21-26 to attend the 2012 annual conference of the American Library Association.  The conference, entitled Transforming Our Libraries, Ourselves, provided attendees with over 500 programs including sessions, speakers, and author presentations.

Perhaps very few conference goers realized that , home to , is under fire amid police shootings, racial conflict, and subsequent protests that have since turned violent.  Gabriel Gutierrez, Director of the Center for the Study of the Peoples of the Americas (CESPA) at California State University Northridge and author of the forthcoming book Latinos and Latinas: Risks and Opportunities (, 2014) tells us more.

Review of media reports regarding the recent police killings in Fullerton and Anaheim, California reveals a disturbing contrast between the tactical responses by public officials and police agencies and the demonstrations that followed the July 2011 Fullerton Police beating and killing of 37-year-old Kelly Thomas and the Anaheim Police shooting and killing of 25-year-old Manuel Diaz and 21-year-old Joel Acevedo the weekend of July 20-22, 2012.

No immediate public response to Thomas’ killing was reported on the night of the incident. Shortly after an unarmed Diaz was shot and killed by police, working class Latino residents gathered to question the killing. Cell phone video shows police responded by releasing an attack dog that knocked over a stroller and bit a woman. Further video shows men and women shielding their children from the rubber bullets police fired upon them while they were seated in a grass area. Several news outlets reported that Anaheim Police offered to buy video from four different residents.

Demonstrations against police violence followed release of cell phone video of the two incidents by local news stations and on social media sites. In , police kept a low profile while monitoring a predominately white upper middle class crowd. The public outcry resulted in the arrests of two police officers and recall of three City Council members. Thomas’ father, a former Orange County Sheriff’s Deputy filed a civil lawsuit while his mother settled with the City of for $1 million.

In , demonstrations drew people from throughout southern . Police responded with a show of military force, were heavily armed, on horse back, and in riot gear. The violence and vandalism that ensued raised concerns that police, in the tradition of Operation COINTELPRO, may have planted provocateurs who advocated violence in order to discredit the validity of the protest aims. Anaheim Councilwoman Gail Eastman, who opposed measures being considered that night, wrote on what she thought was a private message board, “it was a big time win for all who opposed seeing that placed on the November ballot. Tonight we celebrate a win with no shots fired!" The analogy by an elected city representative that shooting and killing young Latinos constitutes a “win” is unconscionable in the least and reinforces the growing public notion of as a city bent on racialized violent authoritarianism.

Responding to the violent nature of police and elected officials in , Presente.org gathered 17,000 digital signatures in a matter of days which it presented to State Attorney General Kamala Harris urging her to investigate the shootings. The U.S. State Department and FBI have agreed to conduct an independent investigation.  Others are calling for political changes in representation by changing from at large elections, which have historically disenfranchised communities of color and poor people to district elections, which ensure representation for residents of all sectors of the city.

The first step in healing must come in acknowledging the human dignity of a Latino population that has been criminalized, scapegoated and maligned in the mainstream media and by public officials and police agencies. A second step must be the recognition that participatory democracy in the form of direct resident participation provides for a transparent discussion of the issues. What happens in as a result of this process will always be gauged by the arrests and charges against police officers, and the ousting of cynical elected representatives in . Nothing less would be acceptable.

Gabriel Gutierrez, Director of the Center for the Study of the Peoples of the Americas (CESPA) at California State University Northridge and author of the forthcoming book Latinos and Latinas: Risks and Opportunities (, 2014)

For more information, see these recent releases from , Praeger, and Libraries Unlimited: 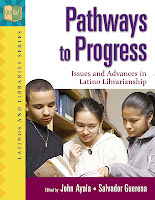 Also, please check out ABC-Clio's American Mosaic Latino American Experience database.  To sign up for a free trial, click here.
From ABC-CLIO at 8:57 AM