Titanic Lore: A Fascinating Look at the Cuisine Aboard the Luxury Liner


The sinking of the ocean liner RMS Titanic on April 15, 1912, was a major sea disaster that still rivets the collective imagination. This year marks the one hundredth anniversary of the night the Titanic struck an iceberg and sank beneath the cold surface of the , and much has been and will be written about the ship and her passengers. To round out the historical details that have become part of the Titanic lore, we present here some information about the provisioning of the ship for her maiden voyage.

Some Titanic enthusiasts have suggested that as the meal came to an end, the first-class guests were served fresh fruit and cheese. This idea is based on the witness of one survivor who mentioned that every table was feted with a large basket of fruit, including incredibly large and delectable bunches of grapes. This goes beyond elegance to the point of overkill, and since it was not listed on the menu itself, it’s possible that the witness was referring to the cheeses and fruits available in the buffet for the guests to take to their staterooms, to help stave off hunger pains until the next feast could be had.

By 1912 it had become the tradition to serve coffee at the end of a good meal, probably either a drip blend or some sort of Turkish variety, much like today’s espresso. This was accompanied by port, post-dining liqueurs, and, for the gentleman, cigars.[1] 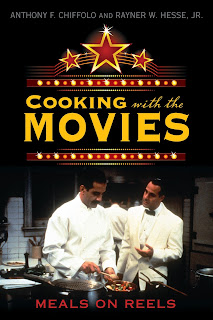 Anthony F. Chiffolo and Rayner W. Hesse, Jr. are the authors of Cooking with the Movies: Meals on Reels and Cooking with the Bible: Recipes for Biblical Meals. When not cooking, Hesse serves as pastor of Episcopal Church in , and Chiffolo is Editorial Director at ABC-CLIO. They reside in .  Their website is www.cookingwiththemovies.com .