Recipes from the Titanic

For those who wish to savor a taste of Titanic fare, authors Anthony F. Chiffolo and Rayner W. Hesse, Jr recreated some of the dishes on the first-class dinner menu, based upon research into the ingredients, flavors, and methods in use in aristocratic kitchens at that time. Be bold and brave, and bon appétit! 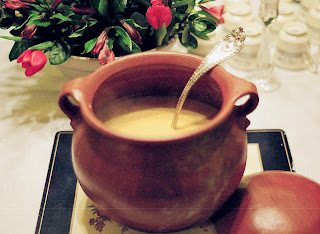 Pour a bit of vegetable oil into a large saucepan, and heat the bacon and garlic, stirring while cooking for several minutes. Chop the shallots, parsnip, carrots, and celery into small pieces and add them to the pot. Cover and cook, stirring occasionally, until the vegetables are very soft, about 10 minutes or so. Stir in the barley, then pour in the stock, add the bay leaf, and bring everything to a boil. Reduce heat to low and simmer until the barley is chewy, about 50 minutes.

Remove from heat, and discard the bay leaf. Transfer the soup cupful by cupful to a blender and puree well, then pour into a clean pot.

Cook the puree over a medium heat until it begins to steam, stirring all the while so that the mixture does not burn the bottom of the pot. Fold in the cream, bourbon, and vinegar and warm gently (do not allow it to boil). Salt and pepper to taste. 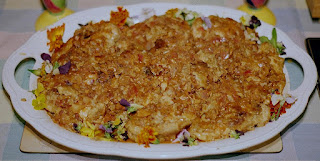 In a large bowl, mix the flour, thyme, salt, and pepper. In a separate bowl, beat the eggs lightly (just to break up the yolks). Dip each chicken breast in the eggs, then cover with the flour mixture.

Melt 2 tablespoons butter in a large skillet or electric frying pan. Place the breasts in the pan and cook for 10 minutes on each side until golden brown. Remove from the pan and set aside, covered.

Add the remaining butter to the pan, and stir in shallots, mushrooms, and garlic; cook until golden brown. Add the wine and cognac and cook for about 1 minute, then add the stock, tomato paste, and sugar. Boil for several minutes so that the mixture begins to thicken. Return the chicken to the pan, and cook for 5 minutes, turning once.

Serve on a large decorative platter. 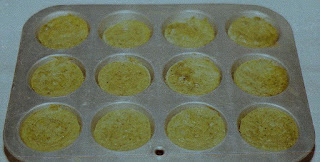 Bring the water and salt to a boil in a small pot; add the peas and cook for only 2 minutes or so. Drain and run under cold water until cool.

Place the peas, onions, breadcrumbs, mint, and Cayenne in a blender and whir for 1–2 minutes; with the motor running, add the eggs, then slowly pour in the Parmesan cheese and the whipping cream. Blend well.

Lightly grease a large muffin pan with Crisco®, making sure the surface and sides of every well are oiled to prevent sticking. Pour the pea mixture into each well, filling it about two-thirds full. Bake for 30–35 minutes, or until a toothpick comes out clean when inserted. Allow to cool for 5 minutes; using a rubber spatula, go around the edges and carefully spoon the pea muffins onto a large platter. Decorate each with a dollop of sour cream and a mint leaf. 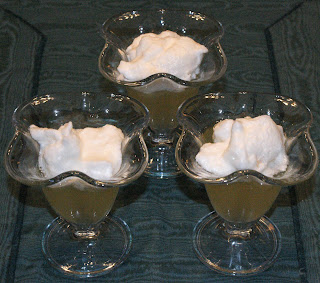 Bring the water to a boil, then pour in the sugar. Once the sugar is fully dissolved, remove from heat and set aside, allowing it to cool for 15 minutes or so.

Combine the wine, champagne, sugar-and-water mixture, and orange and lemon juices in a large plastic pitcher that can go into the freezer. Chill the mixture until it is just beginning to set, like a glace or sherbet. Add the meringue (see next) to it, and chill for ½ hour more.

Pour the frozen mix into an individual dessert cup, and drizzle white rum that has been freezer chilled over each mound. Decorate with a sliver of orange or lemon peel, and serve immediately.

Dissolve sugar into water and cook until 250°F (use a candy thermometer). Beat egg whites with a hand mixer until they form stiff peaks. Pour sugar syrup into egg whites; increase speed of mixer, and beat until cooled.

(A chartreuse in French cooking is a dish that has been turned out of a mold, sometimes made of meat or vegetables, but more usually of fruit within jelly. This is an old recipe that is labor intensive, a good sign that the end product is something special!) 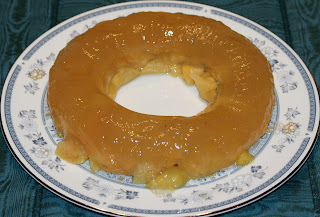 Remove the skin and stones from the peaches and cut them into small pieces. Combine the water and sugar and bring to a boil. Add the vinegar, orange juice, cinnamon stick, cloves, allspice, and peaches to the pot and bring to a boil once again. Reduce the heat to a simmer and poach the peaches in the spicy liquid until they are soft, 6 –10 minutes. Remove from heat and allow to cool, then refrigerate for several hours.

In the meantime, combine the gelatin with 1 cup of water in a medium-size bowl. Bring the second cup of water to a boil and dissolve the sugar in it. Add the hot mixture to the softened gelatin, and pour into a prechilled large mold; allow to cool. Add 2 cups of the peach syrup to the gelatin, then refrigerate until very thick (about 1 hour).

After 1 hour, drain the peaches of their remaining syrup and remove the whole cinnamon and cloves. Pour the peaches into the thickened gelatin mold, and chill until firm.

When serving, upend the mold onto a bed of fresh mint surrounded by edible flowers.