Q: What prompted you to write Iran's Foreign Policy in the Post-Soviet Era? What "message" do you want to communicate?

I had wanted to write a sequel to my book on ’s foreign policy which covered the period of 1980s. So this was a long standing project. Another impetus was the  many mistakes of the Islamic Republic in the conduct of its foreign policy as well as some mistakes on the part of the US and Europe in dealing with Iran. These, too, encouraged me to write ’s Foreign Policy in the Post –Soviet Era: Resisting the New International Order, in the hope that both and other key actors may not repeat past mistakes and especially avoid a destructive military confrontation.

The book is the result of nearly a life time of deep engagement with issues related to and its foreign policy. Therefore, I did not encounter any major surprises in the course of researching and writing the book. Perhaps the only surprise I can recall is the realization of the extent to which  Iran’s key leaders can go in ignoring Iran’s national interest in pursuit of some vague ideological goal and bring untold harm to the country. 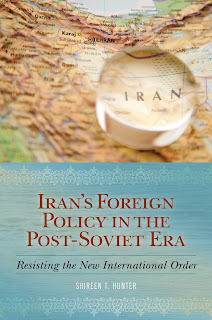 Q: How have people reacted to your book and/or the ideas you set forth? Is it what you hoped for, or is there more work to be done?

The most positive feedback has been from Iranian students and academics in who have read and discussed the book and have communicated their approval of my thesis as set out in the book. I also have had some positive feedback from researchers and Journalists in the and who have found the book helpful in their own work.

I am currently working on a book dealing with issues of reform and reaction in , especially in light of the contested 2009 presidential elections. The book endeavors to put the recent events in the context of ’s socio-political and cultural evolution since the late 19th century. It tries to show how many of current debates are the continuation of unresolved disputes in which have been going on for more than one hundred years. I hope to finish the book by the end of this summer.
From ABC-CLIO at 11:13 AM