Q: What prompted you to write FreeStylin’: How Hip Hop Changed the Fashion Industry? What "message" do you want to communicate?

I served as a fashion reporter in the mid nineties for trade publications DNR and later WWD. My beat included the youth market and hip hop fashion was exploding during my tenure. Free Stylin’: How Hip Hop Changed the Fashion Industry chronicles and critically examines how hip hop celebrities and urban designers carved their own niche in the current $192 billion dollar apparel industry.  It’s a subject matter very similar to me since I wrote about the connection of hip hop and fashion for seven years. Unlike other fashion categories taught in fashion schools and written about extensively in ultra chic magazines, urban fashion has been frowned upon by the established fashion guard--due  in part to the people who contributed to its birth, initial customer base, and its rapid evolution.

The tale is as historic as it is controversial.  For years, designers and manufacturers have taken their cues from the streets to enhance their clothing lines. But it wasn’t until the eighties that the urban consumer was recognized as a viable demographic. Looking to appeal to young customers, the industry began hiring and backing talented African-American designers and entrepreneurs. An unconventional union on the surface, the pairing made a lot of business sense.  Seasoned fashion executives brought proven track records while aspiring designers provided street credibility, music connections, and a fresh perspective on design. The end result: a multi-billion dollar industry.

The message I want to communicate is this is a legitimate segment within the fashion industry. By 2002, the market was pegged at $58 billion.

There were several highlights in my research. During the course of my research I discovered that before modeling for Thierry Muglier, African actor/model Djimon Hounsou  (notable films include Amistad and Blood Diamond. He also has a child with fashionista Kimora Lee Simmons) was hired to be the Cross Colours spokesmodel. In essence, Hounsou was the first urban supermodel. In addition, I discovered that U.S. Supreme Court associate justice Sonia Sotomayor was an attorney for the private firm Pavia & Harcourt and had sued tailor Dapper Dan on behalf of her client Fendi for counterfeiting. Drug dealers, hustlers, rap stars, entertainers and athletes would rely on one man— the legendary Dapper Dan—for their custom wares from the early to late eighties. Taking the logos of luxury designers like Louis Vuitton, Gucci, Chanel and MCM, Dapper Dan was the A-list designer for the streets. 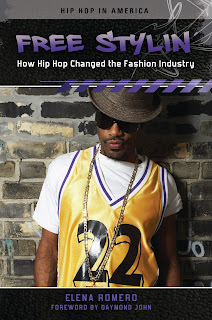 Q: How did your research change your outlook on hip hop and fashion?

Q: How have people reacted to your book and/or the ideas you set forth? Is it what you hoped for, or is there more work to be done?

So far, the reaction to the book has been very positive. Reviewers—ranging from academics, hip hop experts and fashion leaders—have all seen the merits of the book and its subject matter. The story of how hip hop fashion came to be has been told in fragments, but this books helps shape its context by addressing the various components that made it go mainstream.

I’d like to translate the book onto film as a documentary as well as curate an exhibit on this very topic.
From ABC-CLIO at 7:00 AM