Results are in from the Department of Education, and the news isn't quite as rosy as we'd all like. Data collected from the 2010 NAEP civics assessment suggest a significant decline in civics achievement among the high school seniors who represent our country's newest voters. Between 2006 and 2010, those demonstrating proficiency in civics dropped by three percentage points to 24%. Results suggest that six in ten of our new voters won't know what rights they're invoking when they "plead the Fifth," while seven can't name two functions political parties play in our democracy. And at a time where the United States is deeply involved on three fronts—in Afghanistan, Iraq, and Libya—seven in ten high school seniors can't name two pieces of information they'd need to take under consideration when making a decision on whether to take military action in a foreign country!
Rather than wallow in our defeat and nervously watch as each new crop of underprepared voters heads to the ballot box, these results should serve as a catalyst for all of us committed to civic education to redouble our efforts and reverse a troubling trend. Like good teachers, as editors, we see the key to success as demonstrating each lesson's relevance, as doing more than just presenting facts to be memorized by rote. We strive to engage students' interest by contextualizing the basic facts in pressing contemporary debates and by using current events as a springboard to understanding the fundamental principles of government. (Honestly, who wouldn't yawn at the mention of the Commerce Clause, that is, until you look at it through the lens of the national debate over health care reform?)
-David Paige, Managing Editor, American Government and Issues
-------------------------------------------------------------------------------------------------------------- 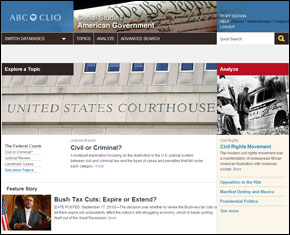 Additional Resources
ABC-CLIO's American Government is the winner of the 2011 Best Educational Software Award in the Social Studies. This database explains the foundations of our government, connects these concepts to the issues of the day, and examines the strengths and weaknesses of the political and economic systems of the United States by comparing them to those of other countries.
From ABC-CLIO at 9:17 AM