The coming Royal Wedding on April 29, 2011, is likely to become a world media extravaganza surpassing that of Prince William's parents' wedding in 1981. With cable and satellite television, social media, and an even larger consumer culture than 30 years ago, there may be no end to its marketability and the wide range of commemorative souvenirs and ancillary events.

The most memorable, however, are the campiest, like William and Kate bobble-heads, a replica engagement ring, and nail clippers with a photo medallion of the glamorous duo. One campy and clever item is the KaTEA & William greeting card that comes with tea bags. "It all started with a cup of tea," the card reads. Each Assam tea bag has a cardboard cutout attached—one of Kate dressed in a pale blue wedding gown and another of William in military regalia.

Those more into crafts and Etsy can pick up Knit Your Own Royal Wedding by Fiona Goble, which shows you how to make stitch doll versions of all the British Royals—even the Queen's corgi.

There are, of course, T-shirts with such phrases as "Royal Wedding Crasher," "It should have been me," and "Don't do it, Kate!" Fashionistas might favor the commemorative plastic cameo rings, pendants, and earrings depicting the happy couple in silhouette, with an inscription of the royal wedding date.

British designer Ted Baker has the "Better Kate than Never" collection of quintessentially British gifts and accessories, including boxer shorts with Union Jack, crown, and rose floral motifs, as well as a commemorative tea towel printed with the wedding date and popular Britishism "A right royal knees up" (slang for a raucous good time). There's even "No More Waity, Katie," the newest nail polish shade from cosmetics company Butter London.

Naturally, television and live streaming by the BBC will be a key component of the Royal Wedding. This isn't relegated to the wedding day itself or even completely topical. Leading up to the event, the BBC will air Modern Monarchy: Dos & Don'ts and Prince William's Africa, and Wedding Central will be airing Charles & Diana's Wedding of course, and Kate: The New Diana? 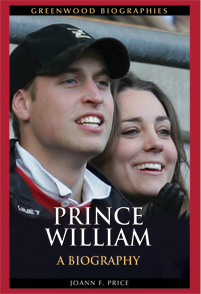 Prince William is well-liked in England as well as the United States and around the world, serving as a role model and trendsetter, especially among his peer group. His decision to wait eight years before proposing to Kate Middleton—a woman who is not of royalty—with his mother's ring is representative of his status as both a traditionalist and a modern man. This biography examines the life of one of the most charismatic individuals in public life today, in Great Britain and beyond—Prince William. 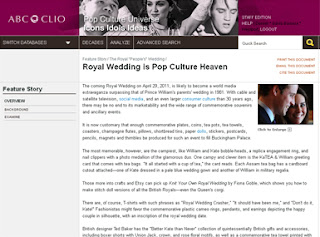