Libya: Another Power Bank Subjected to a Stress Test


Revolutions are unpredictable, dynamic, and stirring, but they tend to follow a small set of simple rules. Drawing on Talcott Parson’s sociological theory, Charles Kurzman concisely explains why: “Coercion, he suggests, is like the reserves of a bank. So long as the demands on it are limited, the reserves can be meted out effectively. When there is a run on the bank, however, the reserves are quickly overwhelmed. No matter how great the reserves of coercion may have been, no state can repress all of the people all of the time.”(1) Revolutions are to an autocratic regime what stress tests are to a bank: a method to check their credibility.
The rules — Revolutions temporarily upset the balance between mobilization power and organizational skills. People like stability. When offered a choice between an acceptable status quo and a better, yet uncertain alternative, most people will opt for the former. The status quo only loses its appeal when people realize it has become unsustainable, but even then revolutions do not start spontaneously. Someone or something needs to mobilize the people to start them. The occurrence of revolutions revolves around mobilization power. Conversely, their outcome revolves around organizational skills. Put differently, the actor with the highest mobilization power leads the revolution, but the actor with the best organizational skills wins it. Organizational skills generate the capacity to create a new, acceptable, and stable situation. Mobilization power revolves around a rallying message and access to media that allow its dissemination despite the regime’s countervailing efforts. The media can be anything as long as they escape state control, but the rallying message has to fulfill specific requirements. It needs to bring about a run on the Power Bank. The message has to focus everybody’s courage and anger simultaneously on one cause. An autocratic regime can only be overthrown by overwhelming its reserves of coercion with a defiant mass.
The players — A classification by role:
The tricks — As in any game, the tricks fit the rules. Their application can be observed in endless variations throughout the Middle East:
The outcome — The ultimate outcome is not determined by how many people the actors mobilize, but by what their organizational skills can provide. Each possible outcome has advantages and drawbacks. Democracy will bring freedom and economic opportunities, but also inflation and income inequality. Islamism will bring social justice and religious purity, but also social rigidity. A new autocracy will merely turn back the clock. For Libya, the problem is that democracy and oil do not mix well. Russia has shown that in oil economies, economic liberalization gives rise to the emergence of oligarchs resulting in a call for a strong regime. A Libyan democratic government will most probably be unable to combine freedom and social justice. In an oil economy there are but few methods to re-distribute wealth. The two most likely foundations of a new social contract are either a patronizing system granting government jobs on the basis of subservience or a social security system based on the Islamic duty to help the poor. The former could evolve into a new autocracy. The latter would tend towards an Islamist state.
(1) Charles Kurzman, The Unthinkable Revolution in Iran (Cambridge, MA: Harvard University Press, 2004), 111.
Talcott Parsons, Sociological Theory and Modern Society (New York: Free Press, 1967), Chapter 9.
Erik A. Claessen is a lieutenant colonel serving in the Strategy Department of the Belgian Joint Staff. His main field of study is the effect of organized violence on democratic political systems. His published works include the article "S.W.E.T. and Blood: Essential Services in the Battle between Insurgents and Counterinsurgents," which was awarded first place in the 2007 DePuy Writing Contest. Claessen is a graduate of the U.S. Army Command and General Staff College, where he earned a master of military arts and sciences degree.
------------------------------------------------------------------------------------------------------------

Stalemate: An Anatomy of Conflicts between Democracies, Islamists, and Muslim Autocrats by Erik A. Claessen
Praeger, 2010
Analyzing Islamic political thought, this book clarifies the dynamics of Middle Eastern conflicts by exposing the link between the political characteristics of Democracies, Islamists, and Muslim Autocrats and the way they contend with problems like popular support, decision-making, sustainment, communication, and the use of force.

Culture and Customs of Libya by Jason Morgan and Toyin Falola
Greenwood, Forthcoming, July 2011
Ideal for high school students and undergraduates, this volume explores contemporary life and culture in Libya. 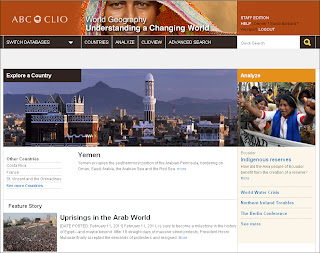 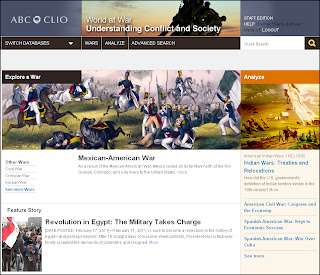 Learn more about our online resources here.
From ABC-CLIO at 1:43 PM