Interview with O.C. Edwards Jr., Author of A Nation with the Soul of a Church

Why is the publication of A Nation with the Soul of a Church important at this moment in history—that is, how does it relate to today's news headlines or connect to contemporary questions or issues?

I think the publication of A Nation with the Soul of a Church is important at this time both for its vivid reminder of the strong influence of religion on the public life of the and its analysis of some of the ways that influence is exercised for good or evil. Different religious groups are taking opposing stands on so many of the issues before the country today and those stands are often communicated to congregations through the sermons of clergy. At the moment there are few clergy whose names are household words, but thousands of pastors are swaying their congregations at the local level and cumulatively they have a national influence.

What drew you to the topic of A Nation with the Soul of a Church? How does the topic relate to you personally?

I was drawn to the topic of how Christian proclamation had shaped American history by Praeger's commission to write a book on it. After completing my long history of preaching I had not known I wanted to write another book, but when I heard the topic I started salivating. It gave me a motive for relating my interest in the wider topic to life in my own society.

What did you learn in the course of your research; what discovery surprised you the most?

Writing the book certainly refreshed and improved my knowledge of American history in general and taught me a lot about  a number of interesting clergy. I believe Bill Coffin was the only one discussed whom I had ever met personally, but I had heard Billy Graham when he was just becoming well known and, since I live near him,  had even seen him in a local restaurant, although I did not impose myself on him. I suppose the biggest surprise to me was to see how the stories of the individual preachers had connections with one another and together created an impressionistic history of American Christianity.

The biggest challenge to me in writing was in living some distance from a major theological library. I was fortunate in being able to persuade the theological librarian at Sewanee, Jim Dunkly, to both tell me what I ought to read and  provide me with it.

I think I would like secularists to be reminded of what a force religion still is in our society and for Christians to see that not all religious influences are for the good of society. I would also like folks to know how much good really good people can do.

If your book inspired one change in the world, what would you want it to be?

My book concludes with "an extra sermon at no extra charge" in which I warn fellow Americans of the dangers of believing in American exceptionalism. While I believe that our standards are some of the highest ever incorporated in government documents, I am afraid that all to often we have failed to live up to them, partly because too many of us assume we can do no evil. Pride always goes before a fall.

Where might others focus their energies in following on your work in this area?

Because my book covers so much territory, a great deal more could be discovered about each of its subjects and the influence of their preaching in their society.

What are you working on now?

Right now I am revising a mystery novel I wrote in 1980. It is set in a fictitious Episcopal seminary during the Vietnam War and one seminarian who was a Medal of Honor winner in the war is suspected of murdering a fellow student who was a flower child. 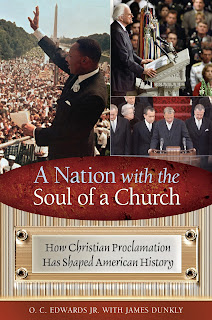 O.C. Edwards Jr., PhD, is a retired Episcopal priest. He is a former president and professor emeritus of preaching at Seabury-Western Theological Seminary at Evanston, IL, has cochaired the Faith and Order Commission, and served on the executive committee of the National Council of Churches. His books include A History of Preaching and How Holy Writ Was Written. With John Westerhoff he edited A Faithful Church: Issues in the History of Catechesis.

Email ThisBlogThis!Share to TwitterShare to FacebookShare to Pinterest
Labels: Religion