Interview with Veronica Tiller, Author of Culture and Customs of the Apache Indians


What prompted you to accept this project from Greenwood Press?

A chance to make a difference in how Native American History, especially with regard to Apache Indians, was taught in high schools, was incentive enough for me to agree to write the book on the Apache Tribes. When Andrea Hernandez Holm, my friend and editor from Tucson called me, “Tom Holm, Editor of the Culture and Customs of Native Peoples in America, is looking for Native writers for a tribal series. He is working with Greenwood Press, ” I jumped at the chance to be one of the writers. I quickly emailed Tom and  learned that the book would be directed at the general reader and high school students. It is my belief that one’s views of history is formed in high school. I couldn't believe my luck in having the opportunity to help shape Native American history.

Did this book have a personal significance to you?

Definitely. This book had personal significance for me for several reasons. First, I am a member of the Jicarilla Apache Nation of New Mexico. Secondly, I am a Native American historian. Between these two identifiers, I believe I had an extra duty to present a portrayal that was accurate, that it was written from the Apache perspective, and scholarly enough to ensure its academic credibility. It meant a lot to me to write about a subject that I know about and a subject I love to write about.

By far, the hardest part for me to write was about Apache religion. It was a real balancing act to present my religion as I knew it on the one hand, and using the best written sources on the religion of the other Apache tribes on the other hand. I knew there were more similarities than differences between the eight Apache Tribal religions, so I had to “watch” how I was presenting this most difficult topic. I think it is more difficult to write about one’s own people. The standards of judgement are different, in that, any praise, accolades, and compliments from my own people mean so much more. At the same time, negative criticisms are more keenly felt. In a sense, they are also counting on me as a Native American historian to tell about our religion in a truthful way without touching on areas that we feel is none of the rest of the world’s business.

In the course of your research, did anything surprise you?

I was surprised how much I did not know about Apache baskets. I guess I always took them for granted. My maternal grandmother was a basket maker and I grew up with her baskets around our house, but I never asked about how they were made. In writing about Apache baskets I came away with a greater appreciation of Apache women who are basket makers. They are on the forefront of preserving our artistic culture through their creativity, skills, and their hard work. I admire them and their efforts.

Apache people have been vilified by history, victimized by historical circumstances beyond their control, yet they came through victorious. Today as a group they still have a very large land base compared to other tribes. They maintain their core social values, still speak the language, and have done quite well economically. Like all Americans they have their problems but, all in all, they are proud to be Apaches and to be Americans living in modern times.

There were many highlights of my research, but what comes to mind, is the willingness shown by my extended Apache family members to work with me. My oldest brother is very knowledgeable about our Apache religion. He was so nice to shared his views and wisdom. In many ways he made my job a bit easier when I was writing about the topic. One of my sisters was also helpful in describing some of our Apache ceremonial practices and even the traditional dresses worn by the women. Many of the photographs in the book were shared with me by members of my extended family. All their assistance reminded me of what makes us an Apache family.

What have you been working on since the publication of Culture and Customs of the Apache Indians?

In 2012, Mary M. Velarde, also a member of the Jicarilla Apache Nation, and I teamed up and published a photographic history of our tribe entitled: The Jicarilla Apache of Dulce, under Arcadia Publishing’s Images of America series. This pictorial history has over 188 photographs, some that are the ‘standard’ photographs used by authors writing about Jicarilla Apache people. What we were able to obtain were photographs from little known collections, like the Mathers Museum of World Cultures at Indiana University, and those from the private of  Jicarilla Apache people. The tribal photographs are not found in any public collections and they added to making our book a very special one.
In this year I am working on a biography of four Puyallup Indian women and their role in the Indian treaty fishing rights in the State of Washington during the 1960s and 1970s. Their efforts led to the U.S. Supreme Court decision known as the Boldt Decision in 1974. This decision reconfigured the way the salmon catch in the waters of the Pacific Northwest is divided 50/50  between the Indian tribes and the rest of Washington’s citizens. By late April, 2013, I will have an author website: VeronicaTiller.com where anyone can find out more about my books and writing and speaking schedules. Thank you for this interview. 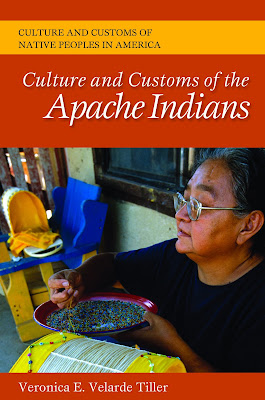 Veronica E. Velarde Tiller is a Jicarilla Apache writer of Native American history and editor and publisher of the award-winning economic reference guide Tiller's Guide to Indian Country: Economic Profiles of American Indian Reservations, which covers 362 modern Indian tribes. She is CEO of Tiller Research, Inc., in Albuquerque, NM.
From ABC-CLIO at 2:20 PM