Interview with Dr. Glenn Starks, Author of Sexual Misconduct and the Future of Mega-Churches

Why is the publication of Sexual Misconduct and the Future of Mega-Churches: How Large Religious Organizations Go Astray important at this moment in history—that is, how does it relate to today's news headlines or connect to contemporary questions or issues?

This book is timely given the social, cultural and religious shifts occurring in the . Spirituality and secularism are being combined in religion to attract younger generations who have different values and ethics than previous generations. This has led to churches integrating secular worship practices with traditional. Unfortunately, a negative impact is that ministers and other church leaders are increasingly engaging in questionable activities such as misuse of church funds and sexual misconduct. Over just the past few years, news reports of mega-church leaders engaging in sex with minors and other church members has garnered national and international attention. While this has happened for centuries in some established religious, its occurrence in mega-churches is more damaging given the church leader is often indistinguishable from the church. The leader founded the church, often serves as its sole face to the community, and in many cases has full control over the church’s operations. Acts of sexual misconduct by that single leader can do irreparable damage to the church’s image, including causing it to lose all of its members.

What drew you to the topic of Sexual Misconduct and the Future of Mega-Churches: How Large Religious Organizations Go Astray? How does the topic relate to you personally?

I was drawn to this topic due to the growing number of cases of sexual misconduct by mega-church leaders, and how these cases have captured national and international attention. Media coverage and public outrage focus on punishing the perpetrator. However, little is discussed on how to combat these incidents, what can be done to support the victims, or how these incidents are negatively impacting the societal view of religion. This book addresses all of these topics, and addresses sexual misconduct from all aspects – from why perpetrators commit these offenses, the role of mega-churches in addressing offenses, and how victims should be supported. The topic personally relates to me because I was raised with church being a prominent part of my personal and family life. While I have never personally been a victim of a minister’s sexual abuse, I know people who have. Some have taken years to deal with personal struggles as a result of an incident that happened during their youth.

What did you learn in the course of your research; what discovery surprised you the most?

The primary thing that I learned, and was the most shocked by, was first the stance some churches have taken with a lack of proactive and reactive strategies to deal with sexual misconduct by church leaders. In many cases, the power of the leader paralyzes the church’s ability to address the issue and continue functioning. Second, I was surprised to find that many churches still protect the leader even after there is overwhelming evidence of misconduct. The final issue I was surprised to learn was just how wealthy these church leaders are. While the churches are non-profit organizations, some leaders live extremely extravagant lifestyles.

The greatest challenge I faced was struggling to maintain a neutral view of the issue while researching cases dealing with heinous acts committed against children and adult victims with psychological problems. The research entailed detailing chronological events of the acts both during and after the offenses. As a researcher and writer, I have been trained to maintain a neutral and factual stance on complex issues. However, I struggled with emotions and personal bias during my research and found myself having to ensure that struggle did not become apparent in the tone of the book.

This book is an in-depth analysis of a prominent social issue that has major impact on the religious framework of the nation. Mega-churches and their leaders have immense influence on millions of people. Readers should analyze each area of this issue from the standpoint of perpetrators, churches, and victims.  I also want the readers to analyze the ways sexual misconduct occurs not only because of the motives and means of the perpetrator. Too often it additionally results because individuals, organizations and even society provide perpetrators the opportunity, continual means and even support to commit acts. This occurs not only in churches, but also in schools and professional settings. How this occurs is revealed throughout the book.

If your book inspired one change in the world, what would you want it to be?

I truly hope this book exposes the necessity of religious organizations to take more responsibility in ensuring the safety of children, people with mental and physical challenges, and those dealing with personal issues. Religious organizations exist by virtue of an enormous amount of power and authority resting in one or a few individuals. Therein exists just as enormous a responsibility to ensure proper oversight of those individuals wielding this power. Religion is based on faith in a higher being or power, but this unwavering faith and trust is not meant to be bestowed on a human leader.

Where might others focus their energies in following on your work in this area?

What are you working on now?

I am currently working on two projects. The first is completing a two-volume series on issues placing African Americans at risk socially, culturally, politically, economically, and mentally and physically. While African Americans have made great strides toward social equality, they are still adversely impacted in such areas as having a greater propensity for certain health issues, facing discrimination in the justice system, and being the victims of various types of violence. I am also working on a book that will provide strategies to youth in attaining educational success at the college level. 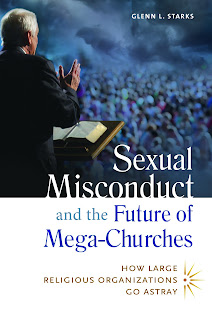 Glenn L. Starks, PhD, holds a doctorate from Virginia Commonwealth University in public policy and administration. He has written several books and articles on government, leadership, and management, including ABC-CLIO's Historically Black Colleges and Universities: An Encyclopedia; How Your Government Really Works: A Topical Encyclopedia of the Federal Government; and Thurgood Marshall: A Biography. Starks has over 20 years of experience working in the federal government and has taught graduate courses in public administration.
From ABC-CLIO at 9:00 AM