I have written Prison Rape: An American Institution? because it is the right time to focus public attention on this continuing dreadful tragedy of the American criminal justice system. It has been nearly ten years since Congress enacted the Prison Rape Elimination Act (PREA) by unanimous vote, yet the situation has not improved. But now, with the appearance of the PREA national standards in 2012, there is hope for change.

What has surprised me in researching this book is how powerful is the evidence of pervasive rape and other sexual abuse in prisons and jails throughout America. The evidence is thanks to the federal Bureau of Justice Statistics that has carried out extensive investigations for several years. Some people used to try to pretend that there was little or no prison rape, but that pretense is impossible now.

One important message that I want to convey is that this continuing, pervasive brutality is a source of national shame that diminishes the moral stature of American society as a whole. I have found that people are receptive to this, which is a ground for hope.

Yet the work is only just beginning. There are major challenges that will demand strong and enduring efforts and expenditures over a number of years. That is why the title of the book ends with a question mark. Prison rape has been an entrenched American institution for many years. The question is whether it will be allowed to remain so. 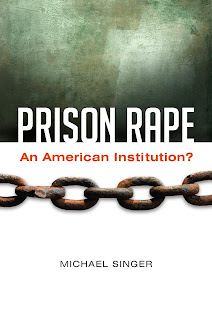 Michael Singer, MA, PhD, JD, is professor at the Dickson Poon School of Law at King's College London, England. He was previously law professor at the University of Pennsylvania and George Washington University, and is a member of the State Bar of California. His many previous publications include Praeger's Jury Duty: Reclaiming Your Political Power and Taking Responsibility, The Law of Evidence (with Jack H. Friedenthal), and The Legacy of Positivism. He holds a juris doctor degree from Stanford University, bachelor's and master's degrees in mathematics from Cambridge University, and a doctorate from the University of London.
From ABC-CLIO at 11:17 AM