In the interview below, Carlos Vargas-Ramos, co-editor with Anthony M. Stevens-Arroyo of Blessing La Politica: The Latino ReligiousExperience and Political Engagement in the United States, discusses the highlights of their research for the book, which includes a refutation of the widespread notion that Latinos are less likely to participate in politics due to their largely Catholic faith.

What prompted you to write Blessing La Política? What "message" do you want to communicate?

There was a clear need to address the impression that Latinos are less engaged in political activities because they are, by and large, Catholic. See, traditionally there had been the opinion and perception in popular culture and academia that Latinos were less politically active because they had a political culture that was less conducive to democratic participation as a result of a lack of a democratic tradition in the Latin American countries where many Hispanics find their origins as well as the dominant Catholic faith which presumably nurtured a fatalistic or compliant attitude towards authority, be it civilian, military and/or religious.

More recently, however, with the work of Sidney Verba, Kay Schlozman and Henry Brady, which focused on the linkages between socioeconomic status, institutional recruitment, skill-building qualities of associational affiliations and political participation, there was a shift in explaining that Hispanics were relatively less engaged in politics than the population as a whole or some other groups in American society (e.g., African Americans, non-Hispanic whites) because belonging to the Catholic Church, they argued, short-changed these Latinos in skill-building and mobilization opportunities for political engagement. Shifting from cultural to institutional explanations for reduced Latino political involvement nevertheless maintained the onus on being Catholic, and this just did not seem to square with what we collectively understood those reasons to be.

Latinos do exhibit lower levels of involvement in some political activities, particularly those that are most visible and common: voting and contacting elected officials. However, this relatively lower level of Hispanic engagement in the political system in the United States is not the result of being Catholic.

One of the most noteworthy features of our collective research is how consistent the findings are. Catholic Latinos are not anymore disengaged from those Latinos who are not Catholic. Indeed, Catholic Latinos may be more engaged in some forms of political activity than other Latinos, depending on the context and on the issues around which people mobilize.

Another aspect about the volume readers may find relevant is that Catholics in general and Latino Catholics in particular are not homogeneous. Rather, there are significant differences among them in terms of attitudes, orientations, and policy positions, as well as religious devotional practices—singularities that make a difference in the political arena. For instance, the Charismatic tradition is very vibrant and extended among Latino Catholics.

How did your research change your outlook on Latinos, politics, and religion?

We as scholars need to increase our attention to the role of religion and communities of faith on politics and political activity, and not simply among those hew closely to the teachings and practices of specific denominations. Rather, we as students of politics need to incorporate front and center the ideological and institutional role of religion in models that explain political activity and governance.

Reception has been very positive. There’s a hunger for this type of focus and analysis. Certainly this volume is but one piece of a larger research field that needs to be explored and engaged fully. There’s a lot of work to do.

I am currently working on the impact of transnationalist practices on political participation in the United States and the country of origin of Latin American migrants. I am contrasting a migration paradigm that is very much in vogue (i.e., transnationalism) with more traditional approaches to migration (e.g., assimilation). 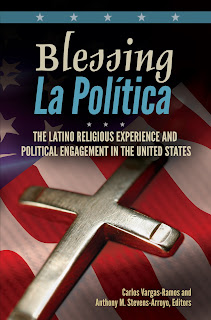 Carlos Vargas-Ramos is research associate at the Center for Puerto Rican Studies at the City University of New York, Hunter College. He is author of Migration and Political Behavior: The Political Incorporation of Puerto Rican Return Migrants; and the articles "Black, Trigueño, White … ? Shifting Racial Identification among Puerto Ricans" in Du Bois Review: Social Science Research on Race and "Caribbeans in New York: Political Participation, Strategic Cooperation and the Prospect of Pan-ethnic Political Mobilization in the Diaspora" in Caribbean Studies.
From ABC-CLIO at 10:01 AM