Karen Juanita Carrillo, a , New York-based award-winning writer and photographer, specializes in African American and Afro-Latino history, literature, and politics.  She is the winner of several journalism awards, including the National Newspaper Publisher Association's "Perspectives Reporting Award" (2002) for coverage of the impact of 9/11 on African American communities, the New California Media Awards in the "Civil Liberties" category (2003), the New York Association of Black Journalists' first prize award for "General / Sport News" (2005), and the NYABJ's second place prize for "International News" (2008).  She is the author of 's new release African American History Day by Day. We sat down with her recently to find out more about this project. 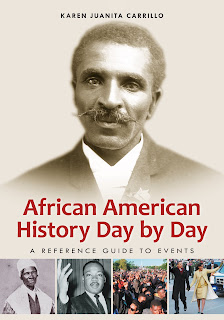 What prompted you to write African American History Day by Day? What "message" do you want to communicate?

I have always been interested in African American history and initially, on my own, I used to take notes about important people and events.  As I collected more and more information, it was just natural for me to start putting it together in a book form.

I hope that the book communicates the idea that people of African descent are an integral part of history and that we can be celebrated for our achievements not only during Black History Month – in February – but every day of the year.

While I always knew that there was much to be proud of about African American history, it’s been amazing for me to truly, methodically understand the depths of misery many Black people lived through and the hard work and patience they manifested in working to end their misery.

Some of the most impressive stories I learned while writing include:

the one about Ellen Craft and her husband, William, who disguised themselves to escape from their enslavement in in 1848.  Ellen dressed herself up so that she would look like a white male enslaver while her husband, William, masqueraded as her servant.  They made it to the North, opened their own business, and became important abolitionist speakers.  They fled to in 1850 after the Fugitive Slave Law was enacted in the and from there published the book, Running a Thousand Miles for Freedom. They only returned to the U.S. after the Civil War and went straight back to Georgia where they bought some 1,800 acres of land and established the Woodville Co-operative Farm School to educate formerly enslaved people of African descent.

the story of Mathilda Taylor Beasley who opened a secret school in which taught African American children to read at a time when doing so was a crime.  After marrying a free Black man named Abraham Beasley who owned land and property, Mathilda was widowed when Beasley died and she went on to become a nun.  She would use her wealth to found the Third Order of St. Francis, the state of ’s first order of African American nuns; and donated Abraham’s land and properties to the Roman Catholic Church in return for support for her creation of the for Colored Orphans.  The Mother Mathilda Beasley Society in continues Mother Mathilda’s work.

there’s the story of Dr. Miles Vandahurst Lynk who published The Medical and Surgical Observer, the nation’s first African American medical journal in 1892.  Lynk, whose parents had both been enslaved, was also the co-founder of the National Medical Association for African American Physicians and in 1900 he founded the .

and the story of George Thomas Downing whose famous father, Thomas, was one of the founders of the all-Black United Anti-Slavery Society of the City of New York as well as the owner of the Downing Oyster House.  In fact, Thomas funded most of his anti-slavery efforts with the income he made from his Oyster House – a place frequented by ’s wealthy.  George Thomas Downing opened his own Oyster House in and also took part in anti-slavery activities.

How did your research change your outlook on African Americans?

If anything has changed, I just have a clearer understanding that there isn’t anything we cannot accomplish, once we put our minds to it.

There’s been a lot of interest from people who are just hungry for this kind of information about the African American experience.  I have been happy to see that my interest in this subject is not unusual: lots of people want to know more about Black history, they just don’t know where to turn to in order to find the information.

I am looking forward to expanding how people view the historical contributions of people of African descent throughout the .  I am working on a book that looks at how Afro Latinos have contributed to the countries and the evolution of the various societies of .
From ABC-CLIO at 8:00 AM