The Supreme Court and the Affordable Care Act

In the recent landmark ACA case, five Supreme Court Justices held that Congress is not allowed to regulate as “commerce” a trillion dollar industry that affects every states and represents one-sixth of the nation’s economy. These Justices also argued that, even if Congress is regulating commerce, they can’t do so through a mandate even though the Constitution says absolutely nothing about mandates. These are the Justices who normally say constitutional text is important, but in this case they ignored clear text (the commerce clause) in favor of their own political perspectives on the proper allocation of power between the states and federal government.

The Chief Justice was one of the five Justices who believed Congress lacked the power to regulate the health care industry with mandates but he joined the four moderates to find the mandate was a valid tax even though both the Congress and the President flatly denied the mandate was a tax when it was enacted. No one knows why the Chief joined with the moderates but the best speculation is that he was concerned with both the Court’s and his personal legacy.

Seven Justices also held that, even though the federal government gives the states the choice to participate in Medicaid or not, the federal government had no right to condition Medicaid money on the states agreeing to comply with the ACA in the future. This was the first time since the New Deal that the Court held unconstitutional a law passed under Congress’ Spending Power.

All three of the Court’s holdings were unsupported by law or fact, though the relegation of health care issues to the political process was the right result. The Court could have achieved the same result, however, by simply following prior law rather than sowing the seeds for future limitations on federal power and trying to preserve the legacy of the Court. Those desires were fueled by non-legal concerns proving once again that the Supreme Court does not act like a court and its Justices do not decide cases like judges.


His latest book, Supreme Myths: Why the Supreme Court Is Not a Court and Its Justices Are Not Judges,  explores some of the most glaring misunderstandings about the U.S. Supreme Court—and makes a strong case for why our Supreme Court Justices should not be entrusted with decisions that affect every American citizen. 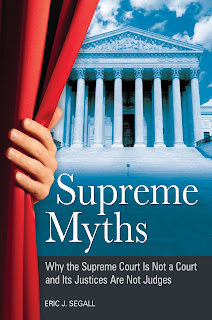