Comic-Con International: was held this past week on Wednesday, July 12 through Sunday, July 15. While originally devoted largely to comic-books, the San Diego Comic-Con has grown into one of the largest multigenre pop culture conventions in the world. Roughly 130,000 attendees visited the convention this year, and tickets sold out within 90 minutes when they were made available in March. Long lines and crowded rooms are a common sight at Comic-Con.
The Comic-Con exhibition hall includes elaborate displays from movie studios, television networks, video game companies, print and electronic publishers, comic-book and collectibles merchants, and much more. An Artists' Alley gives attendees the chance to meet the creative individuals behind the scenes of many familiar pop culture phenomena. As the convention has continued to grow year after year, it has expanded to include events and panels in neighboring hotels and the adjacent baseball stadium.
Here are some pictures from my visit to this year's convention: 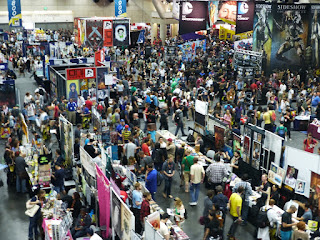 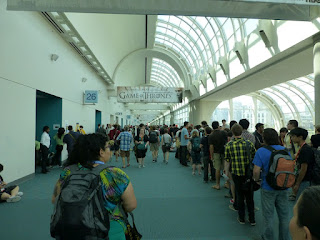 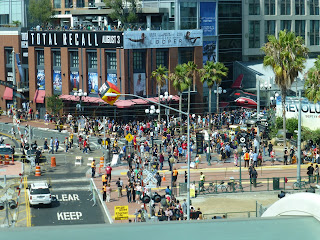 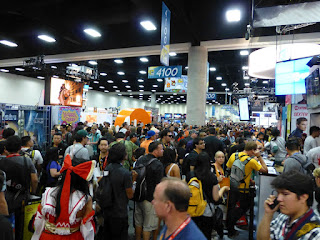 With this year's biggest movies including The Avengers, The Amazing Spider-Man, and (likely) the upcoming The Dark Knight Rises, there is no sign of any decline in the ongoing popular interest in comic book characters and stories. Just as familiar stories from film and television often find their way into print products, popular print stories (such as The Hunger Games and The Living Dead) frequently move very successfully into film and television. The San Diego Comic-Con continues to be a striking example of the convergence of different genres of pop culture across all forms of media, including print, electronic, film, and television.
-David Tipton
Manager, Editorial Development: World History and Religion

Here are a few recently published ABC-CLIO titles that can help teachers and librarians connect comics and pop culture with the curriculum in exciting and engaging ways:

M. Keith Booker, Editor
The most comprehensive reference ever compiled about the rich and enduring genre of comic books and graphic novels, from their emergence in the 1930s to their late-century breakout into the mainstream.
At a time when graphic novels have expanded beyond their fan cults to become mainstream bestsellers and sources for Hollywood entertainment, Encyclopedia of Comic Books and Graphic Novels serves as an exhaustive exploration of the genre’s history, its landmark creators and creations, and its profound influence on American life and culture.

Gladys L. Knight
Female Action Heroes: A Guide to Women in Comics, Video Games, Film, and Television brings to the forefront the historical representation of women and girls in film, television, comic books, and video games. The book includes profiles of 25 of the most popular female action heroes, arranged in alphabetical order for easy reference. Each chapter includes sections on the hero's origins, her power suit, weapons, abilities, and the villains with whom she grapples. Most significantly, each profile offers an analysis of the hero's story—and her impact on popular culture.

Connecting Comics to Curriculum
Strategies for Grades 6–12
Libraries Unlimited
Karen W. Gavigan and Mindy Tomasevich
Connecting Comics to Curriculum: Strategies for Grades 6–12 provides an introduction to graphic novels and the research that supports their use in schools. The book examines best curriculum practices for using graphic novels with students in grades 6–12, showing teachers and school librarians how they can work together to incorporate these materials across the secondary curriculum.

Comics, Manga, and Graphic Novels
A History of Graphic Narratives
Praeger
Robert S. Petersen
This text examines comics, graphic novels, and manga with a broad, international scope that reveals their conceptual origins in antiquity.
It examines broader conceptual developments that preceded the origins of comics and graphic novels; how those ideas have evolved over the last century and a half; how literacy, print technology, and developments in narrative art are interrelated; and the way graphic narratives communicate culturally significant stories.