Christianity is a Queer Thing

Religion is by far the biggest roadblock on the journey toward full civil rights for lesbian, gay, bisexual, and transgender people. For that fact alone, secular activists ignore religion at their own peril. This is especially true in the United States, a country that supposedly separates “church” from “state” in its social policy deliberations. But of course, voters rarely if ever leave their religious convictions behind when they enter the voting booth. Unless and until people of faith and religious institutions come on board with LGBT social justice, the movement will stall.

So I am committed to changing religious discourse on sexuality and gender for the sake of social justice, and great strides have been made in that regard over the last fifteen years. I am just as passionate about changing that discourse for the sake of religion, for religious practice, for spirituality. LGBT-identified people, both today and historically, offer profound insights for that work – not for themselves alone, but for everyone.

As a priest in the Episcopal Church and a Christian theologian, I no longer worry about how to justify the presence of “homosexuals” in Christian churches. That argument has been made repeatedly and persuasively for decades now. I am much more interested in and passionate about the potential of LGBT sensibilities to transform religion itself; and indeed, those sensibilities have already been doing that kind of work for many decades. Some would argue that such work has been going on for centuries.

In both my academic and pastoral work, I find the insights of “queer theorists” to be particularly helpful in transforming contemporary religion, and especially for me, Christianity.

“Queer” means different things to different people, of course. Prior to the twentieth century, “queer” was a somewhat benign synonym for whatever was unusual, rather odd, or a bit peculiar. It eventually attached to those who were perceived to be “homosexual” or those who didn’t quite conform to standard ways of acting like a man or a woman.

In the 1990s, some individuals and communities, especially in the United States, retrieved “queer” in a more positive yet intentionally counter-cultural fashion. At roughly the same time, “queer theory” also emerged as a burgeoning academic discipline which has, in some locations, eclipsed “gay and lesbian studies” as the preferred mode of analyzing, interrogating, and reflecting on the spectrum of diverse sexualities and genders.


I understand queer theorizing to be rooted in a deep suspicion of fixed and stable gender identities, which also extends that critical analysis toward similar complexities regarding race and ethnicity, and class and economics, and how these intersect with political policies and ideologies.

I am particularly fond of William Turner’s musings about whether everyone might in some sense, and at various times, be “queer,” since queerness refers to the experience of not fitting in to established and assumed categories of experience or patterns of relation. I believe that adopting this rather “queer” posture in Christianity offers enormous potential. Beyond apologetic or assimilationist arguments, in other words, one can find queer insights in the history of Christianity that carry the potential to revitalize and transform not only the academic discipline of theology, but also the practice of Christian faith and ministry, and not only for the benefit of lesbian, gay, bisexual, and transgender people but for the whole people of God. As Elizabeth Stuart has argued, “Christianity itself is a queer thing.”


I am so proud to have worked with my friend and colleague Donald Boisvert in collecting and editing the essays in the two-volume anthology, QueerReligion. The breadth and depth of these essays, spanning both historical eras and religious traditions, bear ample witness to the queer transformation of religion. Working on that project renewed my hope, not only for LGBT-identified people, but for everyone who cares to ponder the significance of religion in the project of human and, indeed, planetary thriving. 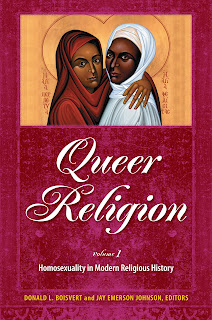 Email ThisBlogThis!Share to TwitterShare to FacebookShare to Pinterest
Labels: LGBT