The History of Earth Day

April 22 marks the 42nd annual Earth Day observance, a day in which millions of people around the world gather to promote awareness on major environmental issues.  Rallies, peaceful demonstrations, and other informational events will be held, focusing on issues such as promoting green living, preserving and conserving natural places, cleaning our air and water, and dealing with climate change. The following excerpt on Earth Day's inception comes from the forthcoming publication America Goes Green: An Encyclopedia of Eco-Friendly Culture in the United States, edited by Kim Kennedy White with contributing editor Leslie A. Duram.

Earth Day, a call for the regeneration of the earth’s polluted environment, was first held April 22, 1970. An estimated 20 million people gathered on that day to confront the earth’s ecological problems.  Originally organized as a day of education through environmental teach-ins on college and university campuses, Earth Day escalated to include rallies, demonstrations, and other protests (including protests against the Vietnam War).  Students from 10,000 elementary and secondary schools and 2,000 colleges took part. The primary mover behind Earth Day was Gaylord Nelson, United States Senator from Wisconsin.  Nelson had been active in environmental issues since his term as Governor of Wisconsin (1958-1962).  He conceived of the idea of Earth Day during the summer of 1969 while speaking at a conference on water quality in Santa Barbara, California. Nelson took note of teach-ins on the Vietnam War being conducted on college campuses and decided to promote the idea of an environmental teach-in. The initial funding was supplied by Larry Rockefeller, an environmental lawyer at the time, and donations from Walter Reuter, President of the United Auto Workers and George Meany, AFL-CIO President. The original coordinator of Earth Day events was Denis Hayes, a graduate student from Harvard University who had previously been involved in political organizing. The first office for Earth Day was donated by John Gardner of Common Cause. Organizers eventually spent $125,000 on the effort and reported receiving 2,000 to 3,000 letters a day.

Earth day raised the question: Can both progress and the environment be preserved or must one be sacrificed in order to protect/further the other? Senator Edmund Muskie of Maine, Vice Presidential candidate 1968 and himself a sponsor of environmental legislation, warned that conservation could take place at the expense of the nation’s economic growth.  Critics also contended that Earth Day diverted the nation’s attention from more pressing problems faced by minority communities.  However, Earth Day’s massive public support forced politicians to address the nation’s environmental concerns.  The first Earth Day galvanized Congress to pass landmark environmental legislation, including the Clean Air Act (1970), the Water Quality Improvement Act (1970), the Occupational Safety and Health Act (1970), the Federal Environmental Pesticide Control Act (1972), the Endangered Species Act (1973), the Safe Drinking Water Act (1974), Resource Recovery Act (1976), and the Federal Land Policy and Management Act (1976).  Today, nearly every state has one or more agencies charged with protecting its environment, and 150 colleges and universities have programs in environmental studies. 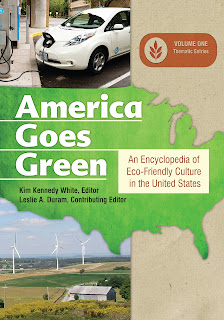 Kim Kennedy White, PhD, is an acquisitions editor for ABC-CLIO's The American Mosaic and coeditor of ABC-CLIO's Folklore: An Encyclopedia of Beliefs, Customs, Tales, Music, and Art.

Leslie A. Duram, PhD, is professor and chair of the department of geography and environmental resources at Southern Illinois University Carbondale. Her published works include Greenwood's Encyclopedia of Organic, Sustainable, and Local Food and Good Growing: Why Organic Farming Works.