Memorial Day is observed in the United States on the last Monday in May to honor the nation’s war dead. The holiday emerged in the wake of the Civil War as “Decoration Day,” a name that endured well into the twentieth century and that described the most common commemorative rite, a sorrowful strewing of freshly-cut flowers on the graves of soldiers who had fallen in the Civil War. The history of Memorial Day is as complicated, surprising, and paradoxical as the story of any public holiday on the American calendar. Its origins are ambiguous and its transformation dramatic, as it developed from a somber and melancholy fête into a light day of leisure and pleasure, the unofficial openingday of summer. Memorial Day, focused largely on the mortal, patriotic service of men, has been a holiday in which women played a central role, and yet it was hardly feminist and remained profoundly conservative. Although a day originally designed to heighten memory, it has become for most Americans an occasion of blissful, escapist amusement or material consumption. Few Americans today know the origins or original purpose of Memorial Day. 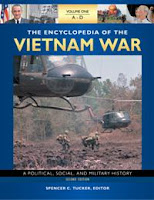 The Encyclopedia of the Vietnam War
A Political, Social, and Military History, Second Edition
By Spencer C. Tucker, Editor

The United States Marine Corps
A Chronology, 1775 to the Present
By John C. Fredriksen
From ABC-CLIO at 10:05 AM