One of the few things that the two political parties currently agree on about Medicare, the federal health care program for the elderly and for some disabled people, is that some change is needed. Of course, the Democrats have already proposed gradual changes to help to reduce costs of the Medicare program as part of the 2010 Affordable Health Care Act. Many of these changes have yet to begin, however. Administration officials argue that by building on or adjusting last year’s health care reform bill, $480 billion would be saved by 2023, with an additional $1 trillion saved in the decade after that.
On Friday, April 15, 2011, the House of Representatives passed the Republican leadership’s 2012 budget proposal. Included with this budget proposal is a Republican plan drafted by Budget Committee Chairman Paul Ryan, R-Wisconsin, to cut federal deficits by almost 4.4 trillion dollars over the next ten years partially through a radical makeover of both the Medicare and Medicaid health plans. The passage of this bill in the House of Representatives followed political party lines, with every Democrat opposed to the measure. The bill has very little chance of passing the Democrat-controlled Senate and is strongly opposed by President Obama.
The Republican plan would end Medicare as we currently know it. Beginning in 2022 the government would no longer pay the bills for the elderly, but would instead provide some amount of money, sometimes called a voucher and sometimes called premium support, so they could then choose coverage from a list of private health insurance providers. Beneficiaries of Medicare would be individually responsible for any costs above the premium support amount. The annual increase in the government contribution would be limited to the consumer price index, a measure of general inflation. One major concern is that the premium or voucher amount would not keep up with the rising costs of health insurance because the increase in health insurance costs has exceeded the increase in the general consumer price index for most years since the passage of Medicare in 1965. A likely result would be that, over a period of some years, the amount provided would not be enough for many of the elderly to purchase health insurance. While wealthier people would still use the premium subsidy to purchase private insurance, many of those with limited incomes might end up without any health care insurance as they age, thus destroying Medicare as a guarantee of coverage for the elderly as it is today. While individuals currently 55 and over would retain the traditional Medicare plan many opponents of the Republican plan argue that support for full Medicare benefits for people in this age group would erode over time, since working age tax payers would know that they would not benefit from the program in that form. Estimates of the Kaiser Family Foundation are that, under the proposal, typical 65-year-olds retiring in 2022 might have to devote almost half of their monthly Social Security checks toward health care costs. This is more than double than what would be spent under current Medicare law.
In addition to this major change in how Medicare operates, other changes are included in the proposed legislation. The age of eligibility for Medicare would gradually increase from 65 to 67. The provisions of the 2010 law to close the Medicare drug benefit’s coverage gap, or "doughnut hole" would also be eliminated, as would the creation of an Independent Payment Advisory Board (IPAB).
Other non-Medicare related changes would be to make Medicaid, the joint federal-state program that provides health care for the poor, into a series of block grants for the states on the premise that state governments would be better able to allocate those funds more efficiently. This would create a major issue with the 2010 health care reform program, which relies on expansions to Medicaid as it is currently structured to help provide care for some of the currently uninsured.
On the tax side, the Republican proposal would modify key portions of the tax code, dropping the top rate for individuals and businesses to 25% while eliminating a number of loopholes. Democrats argue this means that many of the funding cuts to Medicare and Medicaid would be used to lower the tax rates on the wealthiest Americans, ultimately destroying the social framework that has been in place since 1965.
Debates about how best to modify Medicare to either strengthen the program or control rising costs are not new at all. Since Medicare initially passed we have seen both parties suggest major modifications, and certainly there have been important may expansions and additions. These components include George W. Bush's drug component, and the way that providers, both hospitals and physicians are reimbursed. The still the current Republican proposals are more extreme than previous suggestions for improvement and ultimately argue for the elimination of the programs as they have operated over the past 45 years. The outcome of this new/old policy debate will be resolved through the remainder of the year.
Jennie Jacobs Kronenfeld, PhD, is a professor in the sociology program in the School of Social and Family Dynamics at Arizona State University, Tempe, Arizona. Dr. Kronenfeld conducts research in medical sociology, especially in health policy, health across the life course, health behavior and health utilization. She coauthored ABC-CLIO’s Healthcare Reform in America: A Reference Handbook and authored Expansion of Publicly Funded Health Insurance in the United States: The Children’s Health Insurance Program and Its Implications. She also authored Medicare in the Greenwood Press Health and Medical Issues Today series. She is the author of the Emerald Press research annual series “Research in the Sociology of Medical Care”. She is a past chair of the medical sociology section of the American Sociological Association, and a fellow of the American Academy of Health Behavior.
--------------------------------------------------------------------------------------------------------------

Medicare
Jennie Jacobs Kronenfeld
Greenwood, 12/2010
Including up-to-date details about Medicare in light of the 2010 Health Care Reform bill, this book will help readers understand past concerns about the program, as well as current issues and ways to address them. 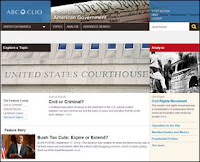 American Government
This database explains the foundations of our government, connects these concepts to the issues of the day, and examines the strengths and weaknesses of the political and economic systems of the United States by comparing them to those of other countries.
From ABC-CLIO at 10:16 AM