Most people who celebrate Christmas have fond childhood memories of the holiday season, such as the anticipation of St. Nick coming down the chimney, depositing stacks of presents to be torn into on that special pajama-clad morning. I, however, think of cranberries.


Every December, our homey little kitchen in Los Angeles would transform into a magical production line of holiday candy and treats. Except for the annual homemade birthday cakes or homemade pie for the school carnival, we did not have sweets. As a sugar-deprived kid, I did not appreciate what a huge favor my parents were doing me. As a result, I grew up with no sweet tooth at all! I am sure to this day that I am the only woman on the planet who doesn’t eat chocolate because its sweetness “burns my mouth.”


But back to the cranberries.


The highlight of our holiday baking was my late mother’s cranberry bread. We would bake for days. It seemed like hundreds of loaves were produced, although I am sure it was more like a dozen. After cooling, wewould carefully wrap each in plastic, followed by festive gift paper, fi nished with a pretty bow. Most of these precious loaves were given only to our closest friends and family, and maybe a favorite teacher. We savored the few that were rationed for our family.


The recipients always had the same reaction–“Love it! Very unusual! May I have the recipe please?” The question was politely deflected or ignored. No recipe was ever provided.


Once I grew up and moved away, I always looked forward to coming home for the holidays. I had only one menu request–cranberry bread. It didn’t matter what else was going to be served, who cared? Just have that bread ready, please. And a couple of loaves to bring home on the plane. Cranberry handling is not as easy as it might sound. It involves three steps: careful washing by hand, followed by careful de-stemming by hand (although Ocean Spray does a pretty good job), and finally, cutting each cranberry three times to produce four equal slices. According to my mother, they must be sliced “widthwise, not lengthwise,” to ensure optimal “texture” in the final product. When you have sliced enough cranberries, you will realize that they really are slightly longer than wider.


As an adult, I tried shortcuts such as using a food processor or various slicing/dicing machines. They all failed. The bread turned out lumpy or soggy. Only careful hand slicing resulted in the right texture and taste. And forget about any of those fancy granite countertops that don’t stain or scratch. My mother’s bread board had a permanent red spot in the middle from the annual slicing. I thought my red fingers were quite festive too, especially since I was too young to wear nail polish.


Once they were sliced, my mother would carefully measure, and immediately add the precious berries as the last ingredient in the secret family recipe. As the loaves baked, the smell was mouthwatering, prompting me to sneak a few tart berries. No, they didn’t taste half as good as the bread smelled, but kids like to sneak things behind their mother’s back. My brother Nate had the better job as he was usually in charge of nut chopping. Sneaking a walnut is a vast improvement over a raw cranberry.


As an adult, for several years I lived in France, where I began to appreciate that cranberries were indeed a peculiar American berry. Not only did their name not translate into French, they were also not available in local markets. Mon dieu! Every berry from the world was displayed at the outdoor market, but not my precious cranberry. Luckily, other Yankees from across the pond were equally starved for their various vittles and someone opened a small shop featuring American packaged goods such as peanut butter and macaroni and cheese. For the price of a fine bottle of wine, I happily procured my bags of Ocean Spray berries and proceeded to make my bread every holiday season.


I still faithfully make cranberry bread each Christmas, playing the role of my mother as I load up my brother with several to take home, and save most for my own consumption. And yes, I too guard the recipe. Even my brother Nate had to repeatedly ask me for it when he wanted to make the bread one holiday season. His guilt trip of reminding me that he was “co-owner” worked ... and I provided a copy. My dear mother would be proud to know that my brother and I did learn something in her kitchen, and that we honor her memory with her special bread every year.


I even became so fascinated with this versatile little berry that I have collected a number of offbeat recipes over the years that feature cranberries as a key ingredient. Cranberry soup, anyone? I’m not sure what my mother would say about her secret recipe being published. I hope she is smiling from heaven and gently saying, “Remind them to be careful–don’t cut your fingers as you slice your berries.” 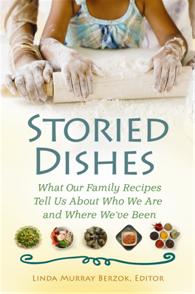