Whether it's the tastiest foods, best movies, or must-see travel destinations, we love "top" lists—making our own and disagreeing with others'. Perhaps it's our attempt to create a little order in an otherwise chaotic world, a way to sort out what's important and what's not and consolidate our opinions. Or perhaps it's just a convenient conversation-starter at parties.
For those with a passion for history, there is no shortage of lists to be made: the greatest ancient civilizations, the cruelest leaders, the most outlandish conspiracy theories. Battles, in particular, are a hot topic, probably because their often bloody and dramatic nature captivate us in a very primal way. It may be relatively easy to determine which were the largest, longest, or bloodiest, but what about the most important? How do you pick the handful of battles that truly changed the world?
Like any other "top" list, ranking the most significant battles is a very subjective task, and everyone who undertakes it will use different criteria to make their decisions. Some might concentrate solely on military outcomes, while others may consider political, economic, and cultural consequences. One person might focus on the immediate aftermath of an engagement; another might take a longer view. And for those who have seen war firsthand, the most important battles are likely to be the ones that they survived.
Here are the five military events I, personally, consider the most important. And, because we all enjoy a bit of suspense, I've made sure to order them from least to most influential.
#5 Battle of Thermopylae, Summer 480 BCE
In this now legendary engagement, a small band of 300 Spartans, led by King Leonidas I, held off an invading Persian army under King Xerxes I that may have numbered more than 100,000. By taking a last stand at this narrow strip of land between mountain and sea, the Spartans were able to protect the retreat of the main army of allied Greek city-states. The Spartans' actions, immortalized in both ancient statues and modern Hollywood blockbusters, are perhaps the best example of patriotism and courage in the face of overwhelming odds. On a more personal note, I was lucky enough to visit Thermopylae in 2002, and standing on the site of that famous battle is an experience I'll never forget.
#4 Battle of Stalingrad, July 1942–February 1943
A true turning point of World War II, the Battle of Stalingrad also has the dubious distinction of being the deadliest battle in history. The eight-month siege produced an estimated 2 million casualties, including more than 40,000 civilians. Germany had sunk vast resources into the battle and was devastated by its defeat at Stalingrad, which turned the tide of World War II in the Allies' favor. Had it not been for the tenacity of the besieged Soviets, the war, and perhaps the rest of the 20th century, might have gone much differently.
#3 Siege of Tenochtitlán, May–August 1521
When Hernán Cortés and his small band of Spanish conquistadores—aided by thousands of natives—laid siege to the Aztec capital of Tenochtitlán, no one could have guessed how big an impact his victory would have. Spain's acquisition of Mexico was its first firm and lucrative foothold in the New World, and other European powers—particularly the British, French and Dutch—rushed to stake their own claims. This sudden influx of Europeans would spell the beginning of the end for the millions of indigenous people living in the Americas. The fall of Tenochtitlán heralded the coming of the Age of Empire and set in motion a series of events that would forever change the history of the Western Hemisphere.
#2 Saratoga Campaign, June–October 1777
Two years into the American Revolutionary War, Major General Horatio Gates was working hard to keep British troops under Lieutenant General John Burgoyne from making inroads in strategically important New York. The Saratoga Campaign, which included battles at Freeman's Farm, Fort Ticonderoga, and Bemis Heights, ended in a devastating British defeat and the surrender of Burgoyne's large army. More importantly, the American victory convinced France to openly join the conflict on the Continentals' side. Without French and, later, Spanish, assistance (including expanding the war to theaters in India, the Mediterranean, and the Caribbean), the United States may never have achieved its independence.
#1 Battle of Solferino, June 24, 1859
Although this battle between the Austrian Empire and allied French and Italian forces was critical in the unification of Italy in the mid-1800s, Solferino is remembered more for what happened after the battle. When both sides retreated from the field, they left behind tens of thousands of sick and wounded soldiers. With no food, water, or medical attention, many died slow and agonizing deaths. Swiss businessman Jean-Henri Durant, who happened to be traveling through the area, was horrified at the suffering he saw and was moved to action. In 1863, he founded the International Committee of the Red Cross, which is today the most active and well-known humanitarian organization in the world. A year later, Durant and the members of the Red Cross organized the conference that produced the First Geneva Convention. The conventions, now numbering four, are the foundation of international law and provide for the humane treatment of prisoners and other victims of war. The Battle of Solferino tops my list because it reminds us that out of great tragedy can sometimes come great progress.
Those are my top picks—what are yours?
--Maxine Taylor, Editor, Military History, ABC-CLIO

This encyclopedic collection of more than 200 of the most decisive and important battles throughout world history gets a fresh interpretation by a noted military historian. 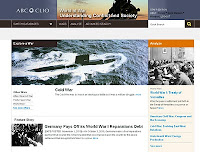 This robust database presents comprehensive information and unique insights into the military conflicts that have defined our world from its beginning to today. 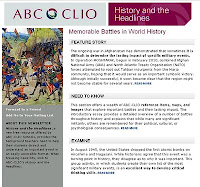 A series of free online resource collections. These materials provide authoritative information and engaging activities that help students and patrons understand important events.
From ABC-CLIO at 8:33 AM

Email ThisBlogThis!Share to TwitterShare to FacebookShare to Pinterest
Labels: History and the Headlines