ABC-CLIO's David Tipton (Manager, Editorial Development: World History and Religion) reports back on his experience at this year's Comic-Con International.

This past week I was in San Diego for Comic-Con, the largest annual convention held in North America. While its origins lay in the comic book industry, over time the convention has expanded its focus to include all forms of popular culture, including animation, film, television, toys and collectibles, and video games. Well over 100,000 attendees flock to San Diego every July for the show. Navigating the exhibition floor without being hit by parts of someone's costume or the bags full of books, toys, and collectibles can be a challenge!

Many of the most successful film and media properties today derive their content from comic books: Spider-Man, Iron Man, Batman, and so on. Many people are familiar with these names and their stories even if they've never read the comic books. The crowds at Comic-Con certainly attest to the popularity of comic-books as a medium of entertainment, but there is also value to be found in looking at the genre from a historical or pedagogical perspective. Cultural historians find comics useful as a means to find out about the times in which they were written. Their story elements and the values therein are valuable resources for insight into the past.

Comics also provide insight into contemporary values. Over time, the stories in comic books evolve and redefine themselves, sometimes re-emerging in new forms of media, such as movies and video games. While the core stories may remain the same through these continual retellings, the new versions invariably add new story elements that reflect current events as well as contemporary cultural values and issues. 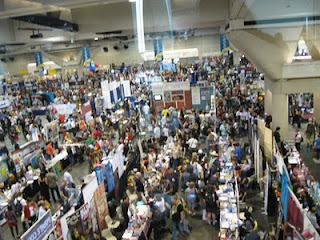 PHOTO: The Comic-Con Crowd
Here are a couple books recently published by ABC-CLIO that tie into these themes of looking at cultural history through the literary genre of comics.

Greenwood has recently published the Encyclopedia of Comic Books and Graphic Novels, by M. Keith Booker, which can help readers find out more about comic books, including the history of the genre, its scope, and its influence on American culture.

Our recent Praeger title, Vampires Today: The Truth about Modern Vampirism, by Joseph Laycock (read Laycock's blog guest post here), looks at the phenomenon of modern vampires in contemporary society, going beyond the fictional vampires of popular culture to look at the lives of people who define themselves as real-life vampires.

Until next year...
--David Tipton